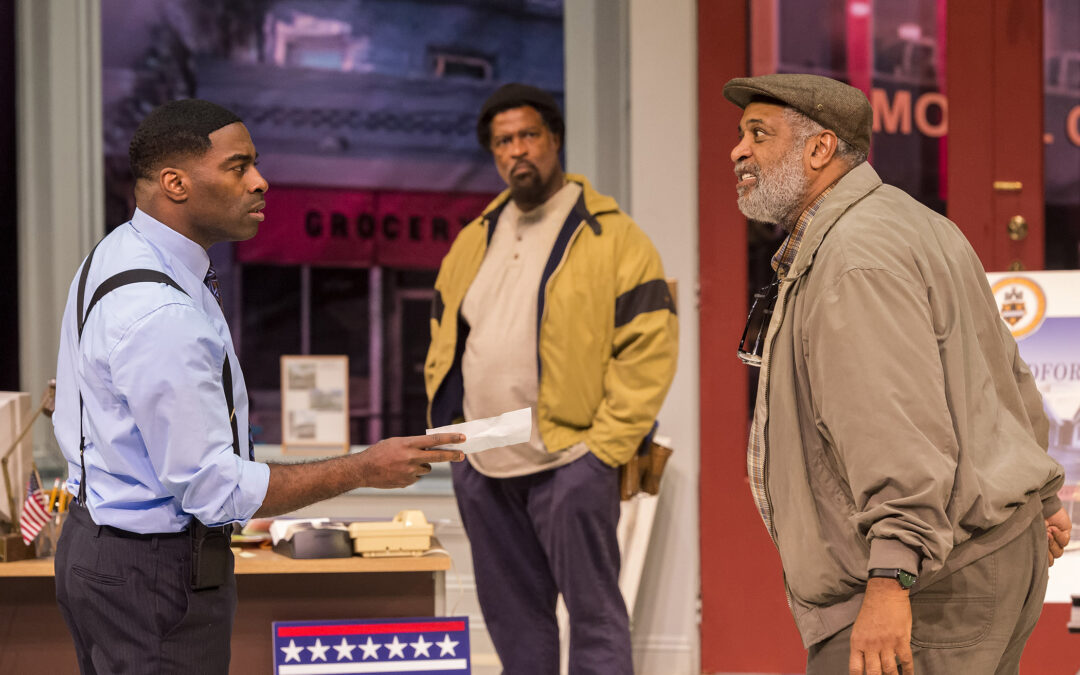 “Black people don’t vote but they hold symbolic weight,” a mayoral candidate tells us at the outset of August Wilson’s “Radio Golf,” at A Noise Within (ANoiseWithin.org) in Pasadena through Nov. 13. The candidate, real estate developer Harmond Wilks (Christian Telesmar), is a man with big plans and dubious intentions, and we soon begin to wonder whether we can trust him or not.

The last play in Wilson’s brilliant American Century Cycle is set in Pittsburgh’s Hill District (which Wilks aspires to revitalize), like most of the playwright’s work. The play is too lengthy, but those familiar with Wilson will appreciate the historical and social context in which he places his characters. Though it will be richer for those who have seen other plays in the cycle, it should be a revelation for those unfamiliar with his work.

Gregg  T. Daniel directs with aplomb. Alex Morris gives the standout performance in a first-rate ensemble, as Old Joe, the owner of a house in the path of Wilks’ development plan. Matt Orduña is superb as construction worker Sterling. They also have the best-written and most interesting characters, reminiscent of the wise and witty inhabitants of other Wilson plays.

Morris also made the most articulate statement during the talkback I saw. “August Wilson dipped his pen in our emotions. His plays speak to a universal language,” he stressed. “We can’t deny our past, but we still have to look forward to the promise of our future.”

In between “The Invisible Man” and “The Bride of Frankenstein,” the great James Whale directed a little picture that has fallen through the cracks. True, “By Candlelight” (Universal, 1933) doesn’t belong to the horror film genre Whale is justly celebrated for today—in fact, it’s a romantic comedy—but it doesn’t deserve to be neglected and forgotten.

Fortunately, Kino Lorber (KinoLorber.com) doesn’t think so either. Their 4K restoration, newly released on Blu-ray, derives from original 35mm film elements and looks better than any movie nearly 90 years old could be expected to look. “Drop dead gorgeous” would not be an exaggeration.

Whale masterfully directs this 72-minute tale of a butler and a maid who fall in love (while mistaking each other for royalty) with a light, breezy touch—almost a Lubitsch touch. This shouldn’t be surprising, considering it was co-scripted by frequent Ernst Lubitsch collaborator Hans Kraly (based on P.G. Wodehouse’s adaptation of a play by Siegfried Geyer), but Whale’s deft handling is a key element in the delightful result.

As for the cast, Paul Lukas (as the amorous butler Josef) didn’t make his mark in comedy, but he did win an Oscar for the highly dramatic “Watch on the Rhine.” If the object of his affection, Elissa Landi (as the maid, Marie), is a bit obscure, she made notable appearances in Anthony Asquith’s “Underground” (a terrific British silent also available on Blu-ray from Kino Lorber) and DeMille’s “Sign of the Cross.”