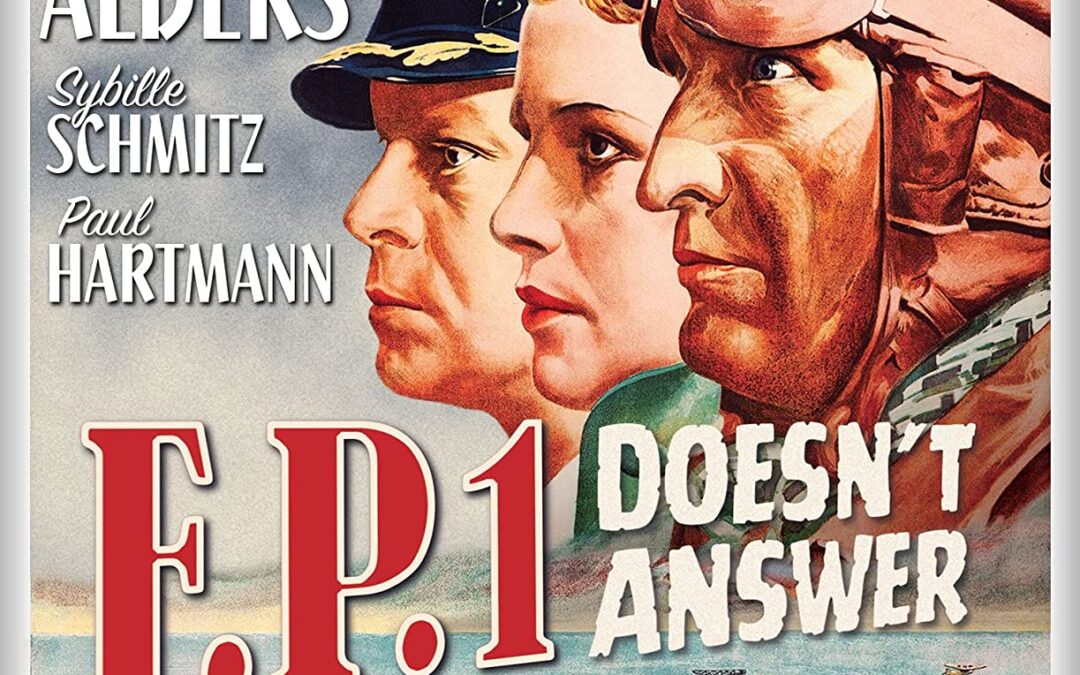 F.P. 1 DOESN’T ANSWER (1932) is a German science fiction film made just before the Nazis turned their movie industry into a propaganda machine. Recently released on video, it would be wholly unfamiliar if not for one detail—Peter Lorre appears in a comedic supporting role. Thus I’d been aware of the title for decades, but thought it was a lost film—until Kino Lorber suddenly issued it on Blu-ray and DVD.

This futuristic picture about a floating airfield, an artificial island in the Atlantic equally distant from four continents, doesn’t touch METROPOLIS but stands on its own as good solid drama. Written by Walter Reisch and Kurt Siodmak from a novel by Siodmak, it stars Hans Albers as a heroic pilot who comes to the rescue of F.P. 1 and its crew after a saboteur has wreaked havoc.

Lorre, who plays Albers’ sidekick (and kept the cast laughing between takes according to one biographer), is one of the best reasons to see the film today though certainly not the only one. The photography, montage work, set design, and special effects are all worthy of note. Conrad Veidt pinch hits for Albers in the English-language version, a fascinating bonus feature on the disc; there’s an audio commentary by historian Eddy von Mueller as well. (The French version with Charles Boyer is apparently lost).

LON CHANEY: BEFORE THE THOUSAND FACES: Vol. 2 collects five rarities made by silent film legend Chaney Sr. from 1914-1917. Producer Jon Marsalis has done a superb job reconstructing these movies (three are pretty much complete) from existing materials at the Library of Congress and creating new scores for them.

Simply watching the versatile young Chaney move—smoking a cigarette, mounting a horse, getting killed in a sword fight—is more interesting than one might think. Though there’s nothing to suggest he’ll emerge as a major star and master of disguise in a few short years, it’s evident he doesn’t act quite like anyone else. Another gem on Blu-ray and DVD from Undercrank Productions.

“Hold everything, here come the cuties!” proclaims “B” GIRL RHAPSODY (1952), a movie that delivers on its promises if ever one did. There’s plenty of sex appeal in New Burlesque, but there’s nothing quite like old-school bump and grind in crisp black and white, as preserved in this picture and PEEK-A-BOO (1953), paired in a double bill by Kino Lorber on Blu-ray in its Forbidden Fruit series of golden age exploitation flicks.

“Chili Pepper, the South American Cyclone,” who wears a headdress to rival Carmen Miranda, is typical of the striptease acts to be seen in these “burlesk” revues. The comedy routines in these time capsules are more curios than keepsakes, ranging from a sketch about nudist camps to a satiric explanation of Communism. These movies have been nicely restored, and look better than anything of this nature available; theatrical trailers and commentaries are included.