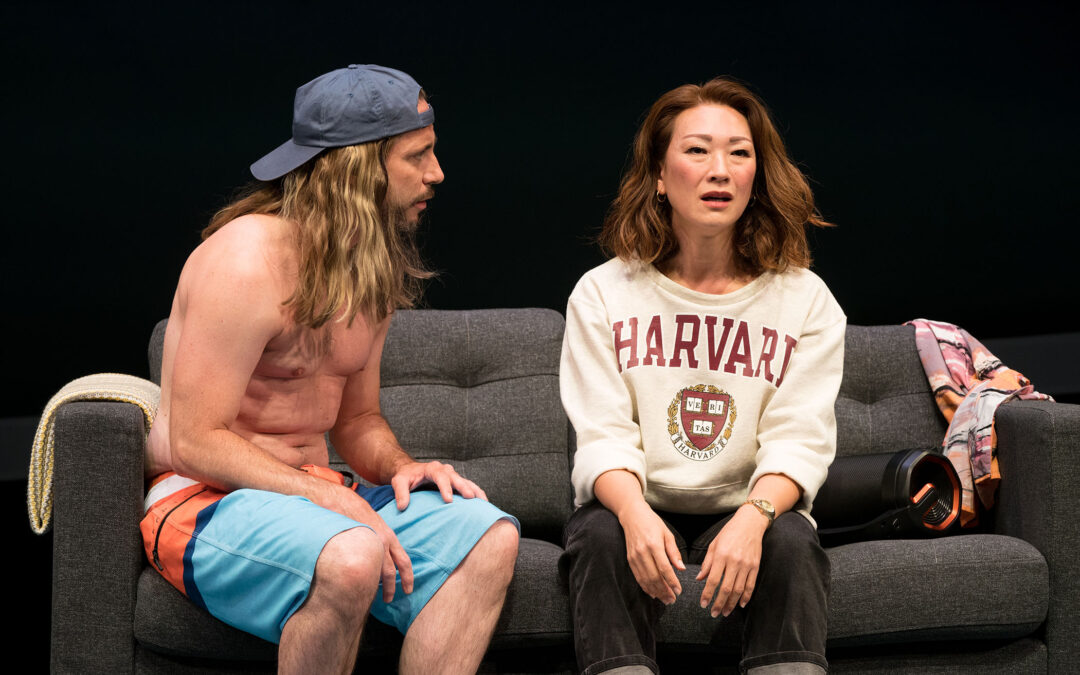 Orange County actors are releasing a tremendous amount of wild, pent-up energy these days, as I’ve witnessed this past week in Costa Mesa Playhouse’s presentation of the zany farce “The Complete Works of Shakespeare (abridged)” and Newport Theatre Arts Center’s production of Terrence McNally’s sendup of the theater world, “It’s Only a Play.” I can recommend both comedic enterprises (the former runs through June 5, the latter through June 19), but what’s going on at South Coast Repertory in Costa Mesa is outrageous, balls-to-the-wall hilarity that simply must be experienced if you have any sense of humor.

Mike Lew’s “Tiger Style!” (which also closes June 5, so hurry) is a most thought-provoking play that makes fun of Asian American stereotypes of all kinds, notably in regard to education, overachievement and parenting. It also mocks the pandemic and the resultant work-at-home phenomenon to appreciative laughs.

Lew centers on a pair of siblings, a computer programmer whose idiot coworker gets the promotion he deserves, and his older sister, a doctor who seeks help to make sense of a breakup with her boyfriend but decides she’s too smart for therapy. Albert and Jennifer deal with their disappointments—and the stereotypical expectations heaped upon them—by taking an “Asian Freedom Tour” to China. They end up in “Kafkaesque limbo” between the U.S. and their ancestral homeland.

The actors (especially Derek Manson as the coworker/boyfriend and Ryun Yu as a nosy old guy in the park and a Chinese general) go so far over the top at times delivering Lew’s razor-sharp dialog they’re almost living cartoons. Ralph B. Pena’s fast-paced direction and Hana S. Kim’s projection design contribute significantly.

No one is who they seem or does what’s expected of them in Lynn Nottage’s “Intimate Apparel” at Long Beach Playhouse (through June 18), except Nottage herself. This drama about the life of a corset maker at the turn of the 20th century, recently invented as an opera, satisfies on a deeply human level and delivers exactly what fans expect of the two-time Pulitzer Prize-winning playwright—or of any writer who requests two hours of our precious time to tell a tale.

We don’t have to be young, female or African American to relate to the journey of Esther as she tries to make her way in the big city and strives to improve her life, or to feel the ache in her heart when things don’t pan out as planned. Nottage knows her characters intimately, and gives us a personal stake in their hopes and dreams.

Alisha Elaine Anderson, the playwright’s chief accomplice in this endeavor, is emotionally invested in the role of Esther to a degree one might expect on  Broadway, but not in a community theater. She completely pulls us into the story, abetted by a solid supporting cast and a director (Brooke Aston Harper) wholly on the same wave length.