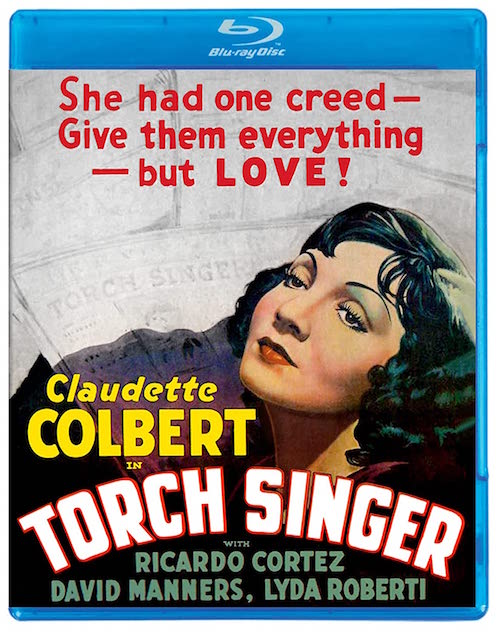 While I’m waiting for live theater to come back to life I’m catching up on vintage films, and books about entertainment personalities of the past. And I have a lot of catching up to do, at the rate Kino Lorber and other companies are putting out Blu-ray releases.

Among others I‘ve recently screened is a title I’d never heard of, “Torch Singer”(Paramount, 1933) with Claudette Colbert (available on Blu-ray from Kino). Hardly surprising it was unfamiliar though, since ’33 was a watershed year for film—easily challenging the more widely accepted 1939 as the pinnacle of the so-called Golden Age.

Colbert seems a little out of her element here in this decidedly Pre-Code melodrama about an unwed mother who goes to a charity hospital to have her baby, then gives the tyke up for adoption. She finds work singing in cheap joints until she’s hired to appear in a classy club and ends up on the radio; meanwhile, her boyfriend (David Manners) returns and learns about the adoption, to his dismay.

While the film is beautifully photographed by the great Karl Struss, its chief virtue is Colbert’s singing, a talent she displayed on screen all too rarely. Romantic comedy was clearly her forte, as we’re reminded by the numerous trailers included here as bonus material—especially the riotous “Bluebeard’s Eighth Wife.” Kat Ellinger’s audio commentary is another plus.

Quick, who was the most popular film comedian of the 1930s? Would you believe Joe E. Brown (best known today for his supporting role in “Some Like It Hot”) topped Laurel and Hardy, the Marx Brothers and W.C. Fields? At least until he made what he’d later recall as “ a disastrous move” to leave Warner Bros. in favor of an independent deal offering him more money and greater creative control, the wide-mouthed star of such gems as “Elmer the Great” and “Alibi Ike” was king of the hill.

“The Joe E. Brown Films” by James L. Neibaur (available in paperback and hardcover from BearManor Media) does a fine job of showing what made the comic a success, and explaining how and why his career fizzled. Neibaur’s assessments of the films themselves are pretty much on target but while he tells us repeatedly how successful the films were, he doesn’t tell us how much they grossed or how much Brown was paid—details that are conspicuous by their absence.

“No Traveler Returns: The Lost Years of Bela Lugosi” (BearManor Media) reveals everything you ever wanted to know about the last years of Brown’s one-time co-star. Gary D. Rhodes and Bill Kaffenberger unearth more about the once-great horror film actor’s slow fade into the sunset, from vaudeville acts to summer stock productions of “Dracula” to cheesy, low-budget movies, than one could have imagined. It’s all here in incredible detail, including publicity photos and newspaper clippings. Plus a foreword by Gerald Schnitzer, who worked on four movies with the actor at Monogram Studios, and an afterword by Bela Lugosi Jr.