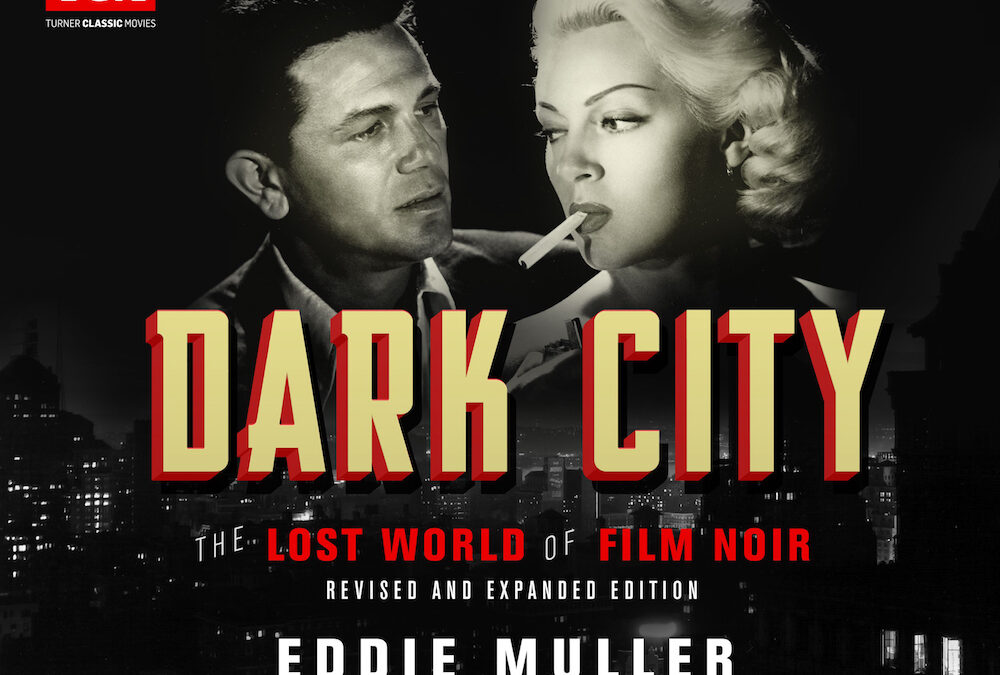 Eddie Muller has made TCM’s Noir Alley must-see TV #1. Figured I could skip the flick last weekend since I’d already seen it, and just watch his intro/outro. Right? That strategy might work elsewhere, but the host with the most makes the introduction so damn compelling, you want to watch and savor the movie all over again. That goes double for the revised and expanded edition of his book Dark City: The Lost World of Film Noir (now out in hardcover from Running Press).

That may be because “noirs hold up best,” as Muller says. When the characters and plots fail to grab you, “they’ve got style and sass to die for.” Not unlike the author/host himself. Bootleggers with sawed off shotguns? Femme fatales with champagne cocktails? Shifty eyed bartenders? City streets slicked with rain? Down on their luck hookers hiding in the shadows? Bed sheets soaked with the sweat of illicit sex? Cuckholded husbands shooting their wives’ lovers in the cujones? It’s all here and more.

What gave John Garfield’s performances their unusually vivid edge, or made writer-director Sam Fuller “the ultimate noir survivor”? How did jazz babies Barbara Stanwyck and Joan Crawford transcend their talent to shake and shimmy to find box office stardom? Why was Ida Lupino the most talented woman in Hollywood history? Muller gives it to us right between the eyes, in crisp, naturalistic prose that tells us just enough to whet our appetite or prompt our memory without going overboard. And to top it off, the book’s designer, Josh McDonnell, has made stellar use of stills and posters to help tell the story.

I couldn’t resist a Q&A with the Pied Piper of Noir.

You seem intent on leading readers to new discoveries in film noir. What’s the most exciting discovery you’ve made this past year?

Releasing some of the Argentine noir films we’ve restored on Blu-ray is the most exciting development for me. And showing them on TCM, where they’re reaching the widest audience they’ve ever had. The airing of Los tallos amargos (The Bitter Stems) was a revelation for viewers. I’ve made a few other terrific discoveries that I’m trying to restore, but I’d rather not name them—I don’t want people seeing them in substandard versions on the internet.

Oh, there’s lots of them. Next year I hope to show The Hidden Room on Noir Alley (aka Obsession), a 1949 film made by Edward Dmytryk when he was working in England after being blacklisted. It’s one of his best, but it’s barely known.

The first time we met at the TCM festival, we agreed my pal Elisha Cook was the quintessential film noir actor. Who else do you think belongs in that category?

Well, he’s the ultimate noir patsy. And he’s been in so many of them! But everyone has their favorites. Bogart is the essential noir performer; it was his onscreen persona that sort of ignited the public’s fascination with the taciturn antihero. Mitchum, of course. And it seems to me that Gloria Grahame is more popular now than she ever was in her lifetime.

What do you consider some of the most underrated performances in noir?

Victor Mature is underrated, period. He’s great in Kiss of Death and Cry of the City but he tends to get overshadowed by the actors playing the bad guys, Richard Widmark and Richard Conte, in these two cases.

Who are your biggest influences, as a writer of crime fiction?

My biggest influences aren’t crime writers, they’re newspaper columnists and reporters of the last century, like Damon Runyon  and Paul Gallico and Ben Hecht. I’m always inspired by how much detail and panache they could pour into a short piece of prose, working under deadline pressure.