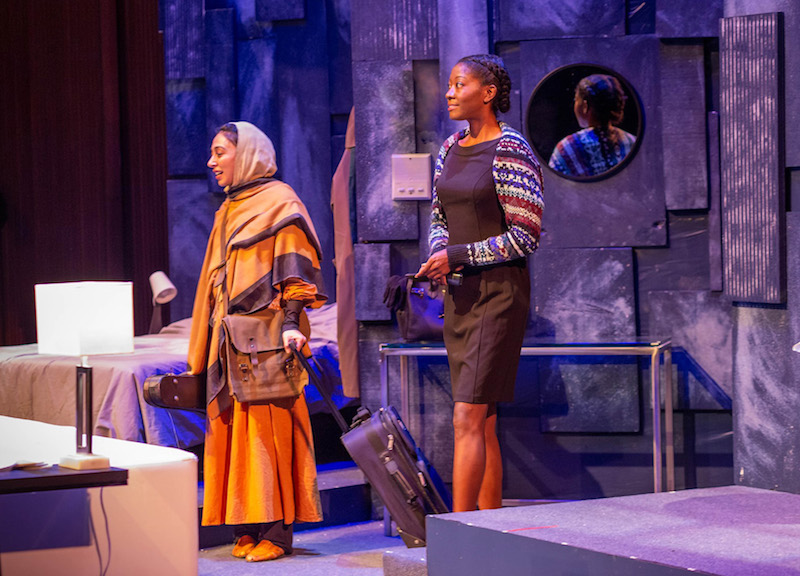 You can never be quite sure what you’re going to get when you go see a play by Wendy Graf, but you can be sure it’s going to be something of substance. Hands and legs inside the car and buckle your seatbelt, it’s going to take you for quite a ride—if the four plays of hers I’ve seen are any indication. “Closely Related Keys,”at the International City Theatre in Long Beach through Sept. 12, is no exception. If you want to see something that’s worth venturing back into the theatre, this would be it.

Julia’s a New York-based attorney, a young African American woman who’s worked hard to get where she is. She’s under a lot of pressure at work and at home when her father drops a bombshell on her, revealing she’s got an Iraqi half-sister, Neyla, who’s fled her homeland, and hopes to get into Julliard to continue her studies on the violin. Life’s about to get a whole lot more conflicted and convoluted than Julia can imagine.

Saundra McClain directs with finesse, almost invisible (as it should be) behind the uniformly strong performances of the ensemble. Sydney A. Mason (Julia) and Mehrnaz Mohammadi (Neyla) in particular have such striking stage presence, it’s almost impossible to separate the actors from their roles. I was startled to run into Mohammadi in the lobby afterwards, as if she couldn’t exist outside the play. Tickets are available at InternationalCityTheatre.org.

The 2nd Page to Stage Playwrights Festival: That’s What She Said, celebrating the female voice on stage, makes its way to the Curtis Theatre in Brea this weekend. The fest consists of staged readings of four new plays—plays that are “funny, heartwarming, relatable, and deserve a wider audience,” says producer Heather Enriquez. Friday: “The Calorie Counters” by Molly Wagner, directed by Brenda Kenworthy, about an overweight woman who’s asked to lose weight for her sister’s wedding.

Saturday: “Hairpeace” by Dr. Janice Liddell, directed by Brooke Aston, about old friends reuniting for a surprise party, and to “sister” the birthday girl through the advanced stages of breast cancer. “A Dry Rosé” by Missy Koonce, directed by Enriquez, a coming of age comedy about four lesbian women, and how they navigate dating in this social media saturated society. Sunday: “Early Birds” by Dana Schwartz, directed by Jill Cary Martin, a comedy about two women who decide it’s never too late to embark on a new adventure, that even in their 70s. Tickets at CurtisTheatre.com.