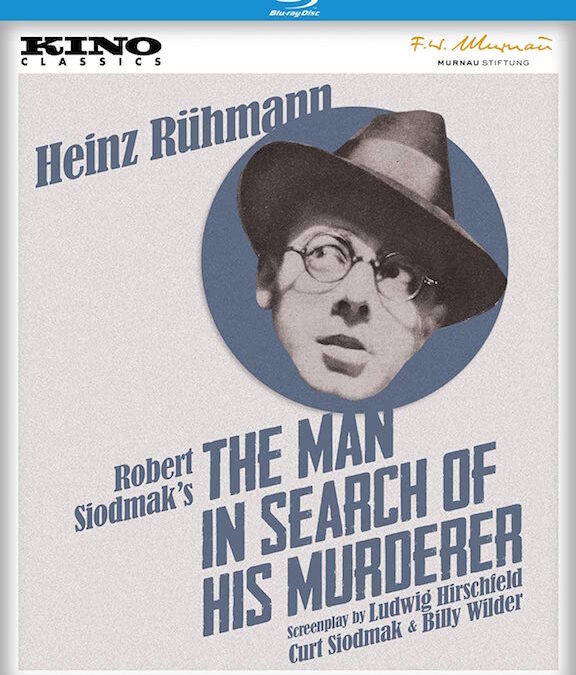 So many vintage films on home video, so little time. An obscure little film like “The Man In Search of His Murderer” (available from Kino on Blu-ray) could easily get lost in the shuffle. And that would be a real pity. For this offbeat black comedy with overtones of film noir, made in Germany in 1931 shortly before the Nazis rose to power, is a forgotten gem.

Long before Robert Siodmak directed “The Spiral Staircase,” his brother Curt Siodmak wrote “The Wolfman,” or Billy Wilder wrote and directed “Double Indemnity,” they collaborated on this picture (co-written by Ludwig Hirschfeld, based on a play by Ernst Neubach). Things get unexpectedly comical as a man attempts to kill himself, then hires a cat burglar to do the job, with one problem after another presenting itself—promptly bringing to mind (this mind, anyway) Wilder’s last film, “Buddy Buddy” with Jack Lemmon and Walter Matthau, made some 50 years later.

Heinz Ruhmann plays the suicidal man, Raimund Janitschek the hired hand. Don’t worry that their names mean nothing; it’s the writing and execution of the concept that counts, and the film is first rate in this regard. The running time is a scant 53 minutes, which seems just right. Why pad it out with unnecessary material, just to make people think they’re getting their money’s worth? Striking use of music (by Friedrich Hollaender of “The Blue Angel” fame) and special effects enhance an already fine film. Kino has added an audio commentary by Josh Nelson to bolster the disc.

“Carol Lombard: Collection II” (available from Kino on Blu-ray) gathers together three of the star’s feature films. “Hands Across the Table” (1935) partners her with Fred MacMurray in one of his earliest starring roles. They’re both paupers trying to marry for money, and natch they fall in love. What the film lacks in laughs it makes up for in charm; MacMurray has buckets of it, even in this early outing.

The supporting cast features two actors of particular interest. Former silent star Marie Prevost (who died tragically in 1937) plays Lombard’s gal pal in one of her last films, a delightful presence squeaky-voiced though she may be. And William Demarest is a would-be suitor of Lombard’s who tangles with MacMurray (three decades before their teaming on TV’s “My Three Sons”) in what is perhaps the film’s funniest scene.

“Love Before Breakfast” (1936) offers Preston Foster as Lombard’s “sparring partner” as it were, continually playing pranks on each other as he pursues her in this romantic comedy. Foster comes off as sort of a poor man’s Clark Gable, minus the charm; it’s really the supporting players that shine in this one, notably Richard Carle (as Foster’s business partner) and Janet Beecher (as Lombard’s mother). Travis Banton’s gowns are a knockout.

MacMurray returns for “The Princess Comes Across” (1936), proving again what tremendous chemistry he and Lombard have, and ironically pointing up what’s missing in “Breakfast.” Lombard has great fun spoofing Greta Garbo in this murder mystery with a comedic touch, another film enhanced by its terrific cast of character actors. Among them are Alison Skipworth, Douglass Dumbrille, Porter Hall, Sig Ruman, Mischa Auer and William Frawley (MacMurray’s original “My Three Sons” co-star before his death resulted in Demarest replacing him).

And speaking of character actors, the great Edward Everett Horton takes center stage in “8 Silent Comedies” (available on DVD from Undercrank Productions), a series of long unavailable two-reel shorts produced by Harold Lloyd. Beautifully restored and scored by Ben Model, these hilarious silent shorts will be a revelation to those who only know Horton as the cranky fussbudget in talkies like “Top Hat” and “Here Comes Mr. Jordan.”