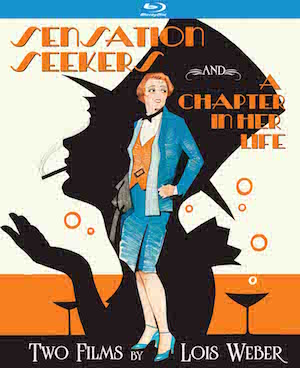 Kino Lorber has gone into overdrive in recent months, pumping out more vintage films on Blu-ray than I can cast an eyeball on. Happily they haven’t ignored lovers of silent film, with a noteworthy Lois Weber twofer among their recent releases. Weber, perhaps the preeminent female filmmaker of the silent era, tackled the social issues and concerns of the day largely ignored by her male counterparts; the movies she wrote and directed are anything but “chick flicks” and hold up exceptionally well today. Her emergence from obscurity is something of a miracle in itself, given the poor survival rate of Universal silents.

Weber’s “Sensation Seekers” (1927) stars Billie Dove (“The Black Pirate”) as Egypt, a small town flapper, the black sheep of her wealthy family—she takes after her father—and the leader of her social set, hellbent on fun and adventure. But she’s disarmingly honest and faces up to the consequences when she’s arrested in a raid on a cabaret.

Despite the male lead being a minister (Raymond Bloomer) who sets out to reform Egypt, the film manages to avoid getting preachy or moralistic. Before we get to the serious stuff, which Weber handles in an intelligent manner without descending into melodramatics, we are royally entertained at the cabaret by titillating silhouettes of scantily clad dancers emulating Josephine Baker—not to mention Dove in some eye-popping costumes. The 2K restoration is accompanied by a score by Arthur Barrow, and a perceptive audio commentary by Shelley Stamp, author of a career study on Weber.

The second feature is “A Chapter in Her Life,” a 1923 drama about a lonely little girl sent to live with her grandfather while her parents are abroad. Everyone is cold and mean to her at first but they eventually warm up to her. If the movie is somewhat reminiscent of “Pollyanna” (filmed by Mary Pickford in 1920), it’s distinguished by Weber’s remarkably sensitive script and direction. It features a winning performance by Jane Mercer in the lead, opposite Claude Gillingwater in a finely etched study that could pass as a rehearsal for the old curmudgeon he’d later play to perfection opposite Shirley Temple.

“The Delicious Little Devil” (also available on Blu-ray from Kino Lorber) is a 1919 comedy that pairs Mae Murray, the future star of Stroheim’s “The Merry Widow,” with a then unknown Rudolph Valentino, two years from his star-making performance in “The Four Horseman of the Apocalypse.” While it stands on its own merits, it provides a fascinating early glimpse of two of the silent era’s more vivid personalities.

Murray, who lives with her washerwoman mother and deadbeat uncle, loses her job as a hatcheck girl and answers an ad for a cabaret hostess and dancer. Claiming to be a woman of notoriety involved in a European scandal, she’s hired at $100 a week, a veritable fortune. At the cabaret she’s introduced to a front-row dandy in a straw hat (Valentino) and promptly falls in love with him, and he with her; the complications that ensue enliven the proceedings under Robert Z. Leonard’s (“The Great Ziegfeld”) direction.

Among the bonus features of this 4K restoration is a score by Nora Kroll-Rosenbaum, an audio commentary by film historian Gaylyn Studlar, a trailer for Valentino’s “Blood and Sand,” newsreel footage of his funeral, and an homage to the star by Orson Welles that was originally broadcast in the ‘70s as part of a PBS TV series on silent films. Something illuminating Murray’s forgotten career would have been a welcome addition, but—as with Billie Dove—there’s nothing.