From Europe to the US: Baltics’ “In the Crosswind,” Hungary’s “Preparations…” 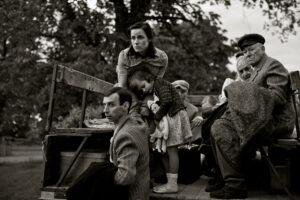 “In the Crosswind” (Film Movement Plus).

Films from the Baltics get short shrift among foreign language films released in the U.S., so it’s especially satisfying to trumpet the arrival of an extraordinary drama about the Soviet Holocaust (premiering on Film Movement Plus June 11), timed to commemorate the 80th anniversary of this tragic event. Martti Helde’s “In the Crosswind” (Estonia, 2014) is an absolute stunner, unlike any other film of its kind and not to be missed.

Unlike Hitler, Stalin didn’t broadcast his horrific intentions when he set out to purge the Baltics of their native inhabitants in 1941. He simply deported tens of thousands, secretly and without warning, sending women and children to Siberia and men to prison camps; very few ever returned to their homeland. Fortunately, Erna Tamm’s diary (which serves as the basis for this movie), survived.

The film begins with a recall of idyllic moments in the life of a young family, Erna (Laura Peterson), Heldur (Tarmo Song), and their small daughter Eliide. We see them enjoying a peaceful breakfast, an improv puppet show, and boating on a lake. Then the husband ties a ribbon around the wife’s waist, promising it will bind the family together forever—before their lives change drastically. But instead of plunging us into the horrors of war and capturing it in graphic, ugly scenes, Helme weaves a series of striking images into a kind of visual poem that transcends the genre without denying the tragedy of what’s taking place.

Credit Erik Põllumaa’s exceptional black and white photography for much of the film’s impact. Much of the story is told in one remarkable tableaux vivant after another, with Pollumaa’s cameras moving in and around and past the deportees as they “freeze” while laboring in a camp, or enjoying a rare moment of recreation at a dance—living, breathing statues in an art gallery not unlike Laguna Beach’s celebrated Pageant of the Masters. Erna sums it up perfectly: “The loveliest years of my life passed as if standing still.”

Bucking the obnoxious trend in one-word movie titles, “Preparations to Be Together for an Unknown Period of Time” (Hungary, 2020) is a compelling drama about a 39-year-old neurosurgeon who returns to her native country to pursue a romance. She’s been in the U.S. two decades with no intent to come back when she meets and falls for a visiting doctor at a conference.

Marta Vizy (a radiant Natasha Stork) has decided Janos Drexler (Viktor Bodó) is the one, worth putting her career on hold for and starting all over again. The only problem with her plan is that he doesn’t really expect her to show up for their meeting at a pre-designated place and time in Budapest, and is so startled to see her he claims she’s mistaken him for someone else. Before long, she begins to believe she dreamed the whole thing up.

One critic has called the film (now available from Kino Lorber on DVD) “Hitchcockian… a game of cat and mouse.” While the latter is an accurate description, it bears no resemblance in style to anything turned out by the master of suspense films; a lazy comparison like this only serves to disappoint viewers. The story takes time to unfold and requires a bit of patience—it is not a thriller—but it’s well acted by the leads and written and directed by Lili Horvát with intelligence and sensitivity, which puts it ahead of much of the competition for your attention these days.

Live theatre is finally beginning to open up in So Cal. Branden Jacobs-Jenkins’ “An Octoroon” makes its L.A. premiere at the Fountain Theatre in East Hollywood June 18, following a week of previews; a revival of Arthur Miller’s “The Crucible” opens June 25 at the Maverick Theater in Fullerton.