“The Producers,” silent “Waxworks” and Ruan Lingyu biopic in 4K 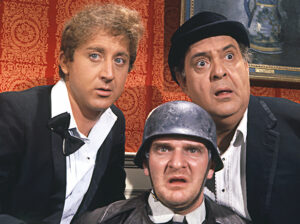 The last time I saw “The Producers”(1968), the original version of Mel Brooks’ first and funniest feature film, the writer-director himself prefaced it with a hilarious introduction at the first TCM Classic Film Festival but the film itself did not look good. Happily, Kino Lorber has remedied that situation with a beautiful 4K restoration (available on Blu-ray from KL Studio Classics).

The film is brilliantly cast, down to the bit parts. Zero Mostel (as producer Max Bialystock) is larger than life, as far over the top as one can go; Gene Wilder (as account Leo Bloom), in his first starring role, is the perfect counterpart. Kenneth Mars (playwright Franz Liebkind), Dick Shawn (hippie actor L.S.D.) and Christopher Hewitt (director Roger Debris) are all at their career best. It should have won the Oscar for Best Picture but the Academy was too constipated as usual; at least Brooks took home a gold statuette for the screenplay.

The cornucopia of Blu-ray extras includes “The Making of The Producers,” a fascinating full-length documentary, with Brooks, Wilder, Mars, Lee Meredith (Ulla), Andreas Voutsinas (Carmen Ghia), the casting director and others, trailers, a commentary by Michael Schlesinger, a gallery of the set designer’s sketches, and a deleted scene. A must for comedy mavens. 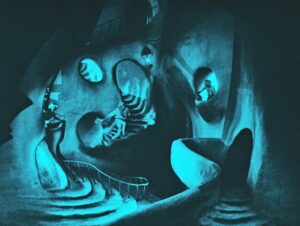 Paul Leni’s last German film, “Waxworks” aka “Das Wachsfigurenkabinett”(1924), looked awful when I first saw it back in the ‘70s. The original is lost but happily, the extant abbreviated version of the film is out on Blu-ray/DVD in a new color-tinted 4K restoration (available from Flicker Alley) that’s nothing less than a feast for the eyes. There are some wonderful Expressionistic sets (by Leni) that could be left over from “The Cabinet of Dr. Caligari.”

The film consists of three tales, allegedly concocted by an aspiring publicist for a wax museum: Spring-Heeled Jack, aka Jack the Ripper (portrayed by Werner Krauss); Ivan the Terrible (Conrad Veidt, who looks eerily like Charles Manson in the role); and the Caliph of Bagdad (Emil Jannings). Bonus material includes two scores, an audio commentary, one of Leni’s bizarre cinematic crossword puzzles and a souvenir booklet.

“Center Stage” (1991), Stanley Kwan’s biopic of Chinese silent film star Ruan Lingyu, has also been digitally restored in 4K (see a theme developing here?), and recently premiered via Metrograph’s Virtual Cinema3. The actress, who was known as The Greta Garbo of China and committed suicide at the peak of her fame at age 25, is skillfully portrayed here by Maggie Cheung.

This unusual feature begins in a steam room with a group of producers scheming to create a superstar by putting an actress in a wide variety of roles. It recreates scenes from Ruan’s life as well as her movies, intercutting them with vintage film clips and documentary-style footage of interviews. It would be more compelling at 100 minutes or so than its length of 154 minutes but is otherwise quite good and visually stunning.