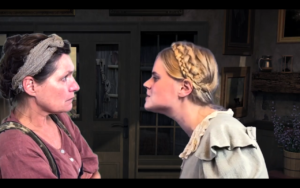 Irish Rep’s “A Touch of the Poet.”

If you haven’t checked out Irish Rep Online’s Theatre @ Home Winter Festival, you’re missing out; happily, it’s been extended through March 7. This series of original digital productions created by Irish Repertory Theatre during the shutdown includes some of the best theatre I’ve seen this year—including O’Neill’s “A Touch of the Poet,” Bill Irwin’s “On Beckett,” a one-man exploration of the work of Samuel Beckett, Geraldine Hughes’ one-woman autobiographical “Belfast Blues,” and Barry Day’s “Love, Noel,” a celebration of Noel Coward starring Steve Ross and KT Sullivan.

Conor McPherson’s “The Weir,” an adaptation of James Joyce’s “Ulysses,” and “A Beggar Upon Horseback,” a dramatic reading of Frederick Douglass’s 1846 Letter from Belfast, marking the 175th anniversary of the abolitionist’s historic trip to Ireland, are among other programs on tap. Shows are free with suggested donations.

It’s likely been a while since a play in Orange County knocked your socks off. “Bismillah, or In the Name of God” by Nakisa Aschtiani had that effect on me. It’s the story of an Iranian-American family in Laguna Beach, questioning their beliefs after a tragic event turns their world upside down. This stage play, reimagined as a radio play, opens the inaugural season of Wayward Voices, a project of The Wayward Artist in Santa Ana, Calif. The play features an impressive cast headed by Diona Elise Burnett and is capably directed by Ani Marderosian.

“Gimpel the Fool” stars Dori Engel in the title role of a solo play performed for The Nephesh Theatre of Israel. The production is based on a story by Isaac Bashevis Singer, adapted and directed by Howard Rypp. The event is brought to us by the Yiddishkayt Initiative as part of their Purim celebration. “Gimpel” also serves as the title of Singer’s first and arguably best collection of short stories, initially published in 1957.