“Laurel OR Hardy” on Blu-ray, Hershey Felder in “Before Fiddler” 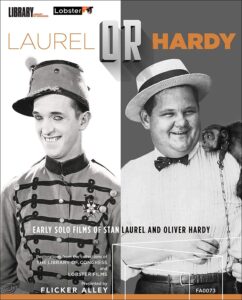 Laurel and Hardy fans haven’t fared too badly during the pandemic. We’ve certainly had plenty to watch. First “The Definitive Restorations”—worth the price of admission for the bonus materials alone—and now “Laurel OR Hardy” (available on Blu-ray from Flicker Alley).

The latest video release to offer the solo films of Stan and Ollie before they became a team is an embarrassment of riches, to coin a phrase—because if you’re thinking, big deal, restorations of stuff like “Mud and Sand” and “The Paperhanger’s Helper” and other things that’ve been making the rounds on 8mm, VHS and DVD for years, you’ve got it all wrong. Only the most ardent L&H fan has seen or will even recognize the names of more than a handful of the 35 short films included in this 2-disc box set.

Those overly familiar titles have been excluded in favor of rarities waiting to be rediscovered, many from the only surviving prints in the Library of Congress, and other materials “lost” in a gaggle of European archives. The films date from 1914, the year Hardy began at Lubin in Jacksonville, Florida, to 1926, with Laurel directing his soon-to-become partner at Hal Roach Studios in sunny California. Their respective efforts for Vim, King Bee, L-KO, G. M. Anderson, Joe Rock, and other producers are represented in the set.

This is decidedly not the Stan Laurel we know, but the roughhewn vaudeville comic who can provoke a laugh but has a long way to go and a lot to learn—years before he figured out how to relax and take his time. And Oliver Hardy is impossibly young in the earliest movies here, such a baby face we can actually believe the oft-told story of the barber giving him the nickname of “Babe.” The opportunity to watch them learn their craft and evolve their screen personas has to be experienced to be fully appreciated.

As a bonus, we get to see Larry Semon (who worked with both of them), Jimmy Finlayson, Charley Chase, Martha Sleeper, Mae Laurel, Billy West, Babe London and other familiar faces who worked with the embryonic comedians. The Blu-ray was produced by Serge Bromberg, Eric Lange, Rob Stone, and Jeffery Masino, with Bromberg among the many musicians providing delightful accompaniment to the onscreen shenanigans.

Hershey Felder, one of the most prolific creators of one-person shows, is at it again. The actor-pianist-playwright, a native of Montreal, has portrayed everyone from George Gershwin and Irving Berlin to Liszt, Tchaikovsky and Chopin in compelling solo performances. Next week he takes on Sholem Aleichem – the beloved storyteller whose tales were the basis for “Fiddler on the Roof” – in “Before Fiddler.” The world premiere of the show, which features the Klezmerata Florentina, will be streamed live From Florence, Italy, on Feb. 7. Tickets are available at Felder’s website.