Theatre online in “Uncertain Times,” from Moliere to the Bard 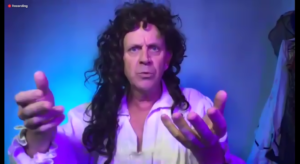 Tim Mooney as Tartuffe in “Moliere than Thou.”

Is the pandemic the death of theatre as we know it? It’s a question being asked ‘round the world. Few are willing to dip their toes in the waters of online theatre while the conundrum is being debated. Yes, the medium is problematic in myriad ways. And no, it’s not live theatre. But until a work-around is feasible—South Coast Repertory has just announced “two full productions under the stars” next year—online is as good as it gets. To me, that’s better than nothing.

Source Material, a nomadic group of diverse artists based between New York, Los Angeles and Reykjavik, Iceland, deserves credit for plunging into these uncharted waters headfirst. The group is currently presenting “In These Uncertain Times,” a digital performance piece devised by the company for Zoom and directed by Samantha Shay, the troupe’s founder and Artistic Director.

The actors, each ensconced in their own Zoom window, make no attempt to disguise their anxieties. “I don’t know who I am,” confesses Stephanie Regina. “Am I Stephanie? Am I just one part of Stephanie? Am I the part who felt like she was nothing without theater as she knew it?” Annelise Lawson tells us how much she was looking forward to this. “I thought it would make me feel better. I can deal with everything,” she affirms, as she starts crying and having a meltdown. Raven Scott is dealing with it by eating everything in sight—candy, string cheese, chips, you name it.

“Let me just say that we are suffering with you,” Miles Hartfelder assures us. “We don’t know what we should do, honestly, or what we should say after doing it.” The actors drink wine, discuss the relationship between grief and love, tell silly jokes and ponder whether they’re making art. At times this experimental piece is poetic, at other times they’re just randomly throwing stuff out there. If it’s a little underwhelming in the end, it’s a brave attempt to interpret our shared experience as we navigate the waters of this unprecedented nightmare.

The cast also features James Cowan, Victoria Sendra, and Grace Tiso. The performance runs about 60 minutes and can be seen this weekend, Aug. 1 at 4pm PST; Aug. 2 at 11am PST. Admission is a sliding scale donation with tickets available for advance purchase.

One hard-working actor who’s decidedly not waiting until the world figures out it’s safe for live indoor theatre again is Tim Mooney. The former Artistic Director of Chicago’s Stage Two Theatre, who normally travels throughout the U.S. with his one-man repertory company, has reconfigured eight of his solo shows for Zoom. I finally caught up with him and “Moliere than Thou” the other night, after having him on my radar for the better part of a decade.

The show, which samples “Tartuffe,” “The Misanthrope,” “The Imaginary Invalid,” “The School for Wives” and other classics, cleverly supposes the 17th century French dramatist-actor-manager is the last man standing after all the other members of his troupe ate shellfish at the same inn and have taken ill. The least he can do is treat us to some of the great speeches from his plays, since he can scarcely afford to return the funds tendered by the audience.

From the scoundrel bent on seducing the daughter of his benefactor to a wily servant masquerading as a nobleman, Mooney is sly, thoughtful, energetic and wildly animated, in short, everything you could want from an actor in a box. If he doesn’t engage you, better check your pulse. His translations are playful in their rhymed lines (“inequity”/”correct to me”); he makes no attempt at a French accent, making the material all the more accessible—his intent with every one of his shows, especially those designed to “crack the code” of Shakespeare’s plays.

Mooney performs “Moliere Than Thou” again Sept. 27-28; meanwhile his schedule includes “Breakneck Hamlet” (Aug. 2-3): “Lot o’ Shakespeare,” one monologue from every play by the Bard (August Aug. 16-17); “Man Cave, A One-Man Sci-Fi Climate Change Tragicomedy” (Aug. 23-24) and others. Facebook Live Sundays are Pay What You Will; inexpensive tix for Zoom Performance Mondays are also available.

UC Irvine’s New Swan Shakespeare Center is offering “A Midsummer Night’s Zoom” (Aug. 26-29), directed by Eli Simon. It will be preceded by an interactive Zoom seminar (Aug. 22) with Julia Lupton, and actors from the cast. The events are free; donations are welcome.

Furthermore: There promises to be plenty of innovative theatre during this year’s all-digital Great Salt Lake Fringe Festival (Jul. 30-Aug. 9).