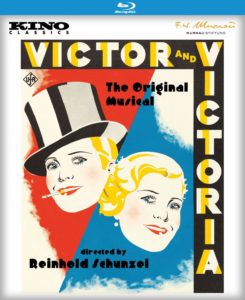 Two entertainers, a struggling ingénue and a veteran thespian, bump into each other on their way out of auditions. Both rejected, they sing to each other about their hopes and dreams. After calling the seasoned Viktor (Hermann Thimig) on his grandiose fibs, Susanne (Renate Müller), unable to find work, goes into an unusual partnership with down-and-out actor. Before long she’s the toast of the town, disguised as a man performing in drag.

If this sounds like a movie you’ve seen with Julie Andrews and James Garner, you’re right. But chances are you’ve never laid eyes on the source, the charming 1933 musical comedy “Viktor und Viktoria” (available from Kino Classics on Blu-ray and DVD). As entertaining as the remake may be, there’s no substitute for the vintage black and white original.

The gorgeous restoration positively reeks of Weimar decadence, though there isn’t a hint Hitler and his Nazi regime were about to take over German cinema and turn it into a propaganda machine. This playful gender bender may be reminiscent of Ernst Lubitsch’s work—notably “I Don’t Want to Be a Man” (1918)–but was written and directed by Reinhold Schünzel.

Leontine Sagan’s 1931 landmark of lesbian cinema, “Mädchen in Uniform” (also available from Kino on Blu-ray and DVD), begins harmlessly enough but quickly piques the interest. Manuela (Hertha Thiele), a 14-year-old “half orphan,” is brought by her aunt to a boarding school for girls, where a gal named Marga befriends her and shows her around. But when Manuela tells the other students she’s in Miss Von Bernburg’s (Dorothea Wieck) dorm, she’s warned, “Don’t fall in love. Almost all the girls here have a crush on her.”

This pioneering drama, based on the play “Yesterday and Today” by Christa Winsloe, is a bit slow but it’s compelling. Though there’s nothing graphic or terribly shocking, it’s smart and spicy. When the school’s head mistress lectures the girls on obeying the rules and reminds them of the strict punishment in store for not doing so, one student cracks to her friend, “Just imagine her naked.”

Both films were released in June via Kino Marquee, a new initiative that creates “virtual cinemas” for temporarily closed independent theaters, as part of a Pride Month salute to Pioneers of Queer Cinema. Both are accompanied by audio commentaries by film historians, and have been restored by Germany’s Friedrich-Wilhelm-Murnau-Stiftung. 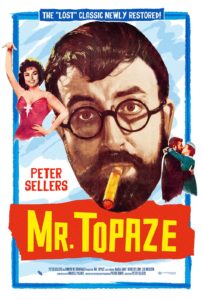 Even the most ardent Peter Sellers fan is unlikely to have seen “Mr. Topaze” (available from Film Movement’s Virtual Cinema). This forgotten 1961 gem, the only feature film credited to the actor’s direction, was adapted by Pierre Rouve from a play by the great Marcel Pagnol. Digitally restored in 2K from the lone surviving 35mm print in the British Film Institute’s archives, it’s a must for those who appreciate Sellers—and a bittersweet reminder of his untimely death 40 years ago this month.

The comedic genius is a shy French schoolmaster who loses his job for sticking to his principles in this film, a characterization that benefits immeasurably from his keen direction. While not at the level of his best work in “Dr. Strangelove” and “Being There,” he is remarkable in his restraint—a quality Jerry Lewis was rarely capable of in directing himself, even at his best. And while Sellers’ makeup is almost identical to the Toulouse-Lautrec disguise he wore in one of his “Pink Panther” films, his timid Auguste Topaz could not be more different than his preposterously broad Inspector Clouseau.

Though Sellers is impressively subtle in this droll British comedy, he permits his co-stars to give much broader performances. Leo McKern (as the school’s headmaster) and Herbert Lom (a corrupt bureaucrat who exploits Topaz) notably go over the top. Lom’s portrayal is fascinating for its similarities to his role as Clouseau’s nemesis, the exasperated police chief in the “Panther” movies that followed. Martita Hunt (a baroness), Nadia Gray (an entertainer), and Billie Whitelaw (a sexy school teacher) are also seen to good advantage; Sellers and Whitelaw share a deliciously subtle romantic scene that’s among the film’s highlights.