“Fun Home” at Chance, “She Loves Me” at South Coast Rep 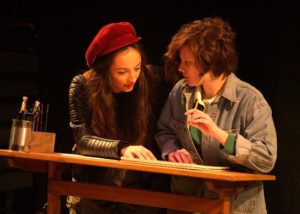 Ketino Christopher and Madelyn Velazquez-Heywood in “Fun Home.” Courtesy of the Chance.

How do you make art from Awkward with a capital A, an unusually difficult and sometimes tragic adolescence? See the groundbreaking Lisa Kron-Jeanine Tesori musical “Fun Home” (playing through Mar. 1 at the Chance Theater in Anaheim Hills) and find out. This one-of-a-kind show, based on the graphic novel by Alison Bechdel, must have seemed unlikely at best on paper—yet it comes to life brilliantly. Never mind that it won five Tony Awards and was a finalist for the Pulitzer Prize, this most improbable of musicals scores winningly at the Chance.

Intimate theatrical experience is what the Chance does best, and this dysfunctional family drama and lesbian coming out story is a fine example—and a perfect choice as their 22nd season opener. Only a pair of geniuses such as Kron & Tesori could pull a rabbit out of a hat on Broadway with a piece of material like Bechdel’s memoir; the Chance is fortunate once more to have the services of Marya Mazor, a magician in the guise of a director who navigates the delicate balance with aplomb.

Mazor is blessed with a first-rate cast, including three actors playing Alison at different ages. Most notable in the ensemble are Ron Hastings (as Bruce, the enigmatic father), Madelyn Velazquez-Heywood (who braves the most emotionally complex role of Medium Alison), and the wondrous Holly Reichert (Small Alison), who seems destined for big things. Lex Leigh’s musical direction and Hazel Clarke’s choreography add finesse to the production.

“She Loves Me,” the Joe Masteroff-Jerry Bock-Sheldon Harnick musical staged by the Chance a few years back, is enjoying a sparkling revival at South Coast Repertory (through Feb. 22 in Costa Mesa). The production is outstanding in almost every respect, conveniently obscuring the fact that the show itself has some failings—the primary one being the absence of a single great song. “Vanilla Ice Cream” and “A Trip to the Library,” arguably the two best tunes, are both in the second act, making this two-and-one-half-hour confection a very long evening.

If the plot of this romantic comedy seems familiar, you may know it from the 1940 film “The Shop Around the Corner,” the 1949 musical adaptation “In the Good Old Summertime,” or the 1998 remake, “You’ve Got Mail.” Or even Shakespeare’s “Much Ado About Nothing,” as the show’s music director, Gregg Coffin, has suggested. “She Loves Me,” based on the play by Miklós László that inspired the films, stands on its own merits. But the show, set in 1930s Europe, has been stripped of the Old World charm that helped make “Corner” such a delight, and that’s a mistake.

Though Brian Vaughn seems all wrong as the head clerk, Georg, Erin Mackey and Marlene Martinez excel as salesgirls Amalia and Ilona, and Gregory North is fine as shop owner Mr. Maraczek. Danny Scheie largely steals the show as the headwaiter in the riotous café scene, so wildly entertaining you don’t want it to end. David Ivers’ solid direction is buttressed by Jaclyn Miller’s choreography and Jo Winiarski’s set design.