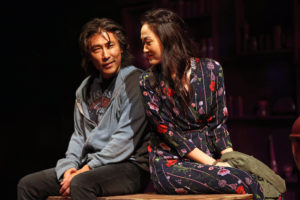 Had I read a synopsis of Julia Cho’s “Aubergine” (at South Coast Repertory through Nov. 16) and realized it focused on a dying parent I might have chosen to skip it, having lost both parents this past summer. And I would have missed one of the best plays I’ve seen in roughly 35 years of cherry-picking South Coast Rep’s offerings. Cho is a master of words and silences whose spare, poetic writing makes precise use of both and doesn’t waste a morsel of either.

Lisa Peterson works so well with the offbeat sensibilities of Culture Clash it comes as something of a surprise her direction of this play is so perfectly in tune with Cho, who could not be more different. The seven-member cast is headed by Jinn S. Kim as a Korean American chef whose father is on home hospice; Jully Lee (as Kim’s girlfriend) and Irungu Mutu (as a hospice nurse) stand out among the flawlessly chosen ensemble.

Myung Hee Cho’s ingenious scenic and costume design and John Gromada’s original music and sound design contribute substance to the show. All told “Aubergine” resembles an exquisite meal prepared by a great chef, not unlike one depicted in the drama. It’s the kind of play SCR made its reputation on, the sort that will stick to the ribs of the devoted theatregoer who maintains a steady diet of plays, to obtain the kind of experience they simply can’t get from movies—even the best ones.

Esa-Pekka Salonen may no longer wield the baton over the Los Angeles Philharmonic as its principal conductor—as he did from 1992-2009—but at 61 he’s still a dynamic presence on the podium, as he demonstrated at the Philharmonic Society of Orange County’s recent debut concert of the 2019-2020 season. The centerpiece of the concert, Tchaikovsky’s Violin Concerto in D major, Op. 35, offered the opportunity to catch 18-year-old Daniel Lozakovich in his L.A. Phil debut; that he lived up to mantle of “rising young star” thrust upon him is indisputable.

Lozakovich seemed almost too youthful for the refined technique he displayed. He had no trouble with the exacting demands of the piece, from his carefully measured tones in the soft, nuanced passages of the andante, to his bold strokes during the spirited gallop of the vivacissimo. Coupled with Bartok’s offbeat Concerto for Orchestra plus the OC premiere of Salonen’s own quirky and funereal “Castor,” it was a memorable evening at Segerstrom Center for the Arts.

Upcoming this month, the Philharmonic Society will present the Modiglini String Quartet (Nov. 8) and the Danish String Quartet (Nov. 19), both at SCFTA’s Samueli Theater; the Zurich Symphony Orchestra performing Vivaldi’s Four Seasons at the Renee & Henry Segerstrom Concert Hall (Nov. 20); and the Orange County Youth Symphony at Chapman University’s Memorial Hall (Nov. 17) and at RHSCH (Nov. 24). The latter is a free event, “Why Music Matters: Intro to the Orchestra.”