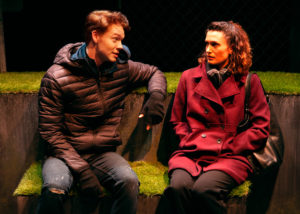 Sam Bullington and Amanda Zarr in “The Vandal.” Photo by Doug Catiller.

Does everything we see have to make perfect sense or fill in all the blanks? Some would say yes; I enjoy a little mystery. I’d want to know exactly what a party host is putting in my drink but when it comes to theatre, I don’t necessarily want everything fully explained. Hamish Linklater’s “The Vandal” (continuing in its West Coast premiere at the Chance Theater in Anaheim Hills through October 20) is one of those plays that doesn’t spell everything out for the audience, and is the more compelling for it.

A garrulous young guy strikes up a conversation with an older woman at a bus stop, and Linklater is off and running—notably because the man won’t stop talking. He imposes on her to buy him a beer, allegedly because he’s too young; she starts off on the wrong foot with the liquor store owner before a more sympathetic conversation ensues. Eventually this seriocomic drama detours to the dark side and veers off into the Twilight Zone. Dark and weird though it may be, it’s a journey well worth taking.

Frank Ferrante brought “An Evening with Groucho” to the Merage Jewish Community Center in Irvine Sunday, but unlike Chicago—where he recently performed his long-running one-man show to a packed house—the OC audience didn’t always show him the love. And that’s a pity. It’s not only Ferrante’s pitch-perfect impression of Groucho Marx singing “Lydia the Tatooed Lady” or “Hooray for Captain Spaulding,” or running amuck like an escaped lunatic on steroids that makes the show the pure joy it is, it’s his willingness to jettison the script at any given moment in favor of connecting with the audience.

The performer does it all with the breezy irreverence, unflappable demeanor and abrasive wit the late cigar-wielding film and TV comedian employed in his prime, to a degree few actors or mimics could hope to achieve. Dreya Weber’s sure-footed direction and Gerald Sternbach’s nimble accompaniment underscore the merriment, whether he’s telling stories about the Marx Brothers making movies at MGM, doing push-ups on the piano or bantering with a child selected from the audience.

Ferrante scored big laughs when he prompted the stage manager to make a cup of coffee for a man seated in the third row, and urged him to pass it around. But the high point of the show Sunday arguably came when a woman in the front row persisted in staring at her cell phone; the actor confronted her point blank and gently needled her— repeatedly, without ever breaking character—until she finally turned off the contraption and gave him her undivided attention.

Ed Asner appears at the Merage JCC in a new one-man show Nov. 9, as part of OC Jewish Arts Festival 2019. “A Man and His Prostate,” written and produced by Ed. Weinberger, is based on the Emmy Award-winning TV writer’s real world experiences. “Theodore Bikel: In the Shoes of Sholom Aleichem” (Nov. 5) is one of four new films that will be shown as part of the festival; Israeli pop star Rami Kleinstein (Nov. 2) and author-filmmaker Tiffany Shlain (Nov. 11) are among others who will appear during the month-long event.