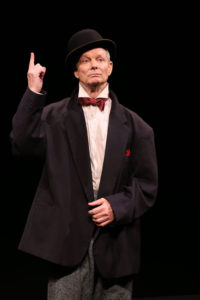 Bill Irwin in “On Beckett.” Photo by Carol Rosegg.

Beckett Central – otherwise known as Center Theatre Group – has come up with yet another must-see for devotees of the Irish playwright, following their first-rate production of “Happy Days” earlier this year. This time it’s an anthology of sorts titled “On Beckett,” conceived and performed by Bill Irwin (through Oct. 27 at the Kirk Douglas Theatre in Culver City). CTG’s sixth offering of the Nobel Prize-winning writer’s work in seven years is in part a master class in clowning and in its entirety a terrific way to start the season. Happy days indeed.

“This writing haunts me,” Irwin notes at the outset, admitting in the next breath he’s not a Beckett scholar—and thank God for that. Looking for a means to share “the place this language has had in my noggin and in my life,” he feels his is “an actor’s relationship to Samuel Beckett.” Rather than analyze it in the manner of a college professor, the MacArthur-Guggenheim-Fulbright-NEA recipient dissects the writing in a way that makes it as accessible to a mass audience as it’s ever going to get.

The program includes excerpts from “Texts for Nothing” and two Beckett novels. The centerpiece of the evening, however, is a down-to-earth deconstruction of “Waiting for Godot,” stripped of the pretentious attitude and verbiage that typically accompanies such discussions.

A dialogue with a child (alternately played by local schoolboys Carl Barber and Benjamin Taylor) may seem an odd choice for a selection from “Godot” but it works well in the otherwise one-man show. Irwin also makes uncommon sense of a famously inscrutable monologue delivered by a character called Lucky, a woebegone servant with a rope around his neck.

At one point in the show he dons an oversize jacket and a pair of baggy pants, indulging in physical comedy more Chaplinesque than anything else; suddenly the years drop off of him and he’s made of rubber. It’s a stunning display of physicality and a smart move, ensuring those more familiar with Irwin than Beckett will depart happy and satisfied.

The world premiere of Ethan Coen’s “A Play Is a Poem” (at CTG’s Mark Taper Forum in Los Angeles through Oct. 13) is a more fitful experience. The offbeat evening consists of five one-acts of varying lengths and strengths by a playwright best known for the films he’s written, produced and directed in collaboration with his brother Joel.

“The Redeemers,” a short piece about two deadbeats and something apparently buried under the floorboards of their abode, strongly suggests the Coen Brothers’ “Fargo” without duplicating the specifics. “A Tough Case,” which takes place in a cut-rate detective agency, emulates a low-budget film noir, complete with atmospheric lighting and crisp staccato dialogue.

“At the Gazebo,” a less-than-satisfying Victorian era romantic drama, and “The Urbanes,” somewhat suggestive of “The Honeymooners,” both center on couples with a difference of opinion. The playwright bites the proverbial hand that feeds him with “Inside Talk,” a sharp, satiric one-act that pokes fun at moviemaking and Hollywood and brings to mind the Coens’ film “Barton Fink.” Spotlighting a pair of shmucky producers and making jokes about screenwriting, agism and moral issues, it’s arguably the most successful of the five pieces and certainly the funniest.

Neil Pepe capably directs a well-chosen ensemble of actors, drawing notably fine performances from Joey Slotnick (in three of the five plays), Saul Rubinek and Michaela Diamond among others. Singer Nellie McKay, who wanders about vocalizing between acts, is largely incomprehensible but offers up a delectable cabaret entertainer a la Marlene Dietrich.