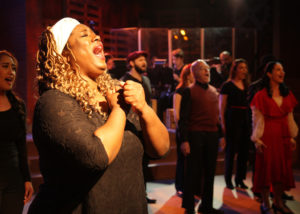 Audience expectations may be deservedly high for “Ragtime: The Musical” at Chance Theater in Anaheim (through July 28). After all, the Terrence McNally-Stephen Flaherty-Lynn Ahrens adaptation of E. L. Doctorow’s popular novel was nominated for 13 Tony Awards. It’s a pleasure to report those expectations were not only met but surpassed, at least for this reviewer. But Chance doesn’t do things half-way. For openers, they brought in director Casey Stangl, whose reputation (honed locally by numerous productions at South Coast Repertory over the years) precedes her. And—no surprise—she delivers.

Stangl’s innovative concept of staging the musical as a play-within-a-play put on by warehouse workers enhances and updates the show. Her masterful handling of the 19-member ensemble cast, in league with Kelly Todd’s superb choreography and Robyn Manion’s solid music direction, makes the most of the material. Set in New York at the turn of the last century and more timely than ever today, “Ragtime” intertwines the stories of an upper class family, an Eastern European Jew and a young black musician who becomes a superstar in Harlem.

Portraying the U.S. as a nation of immigrants, the show celebrates the contribution of various ethnicities; it also recalls such colorful personalities of the day as Harry Houdini, showgirl Evelyn Nesbitt, Booker T. Washington, anarchist Emma Goldman and Henry Ford. While the scenario ignores Ford’s virulent anti-Semitism (a missed opportunity on the part of the writers), it makes much of the era’s racism and mounts a staunch indictment of bigotry.

Standouts amid the exceptional cast include Wyn Moreno (Tateh), Dony Wright (Coalhouse Walker Jr.), Yunga Webb (Sarah’s Friend), Joseph Bricker (Younger Brother), Sarah Pierce (Nesbitt), Jabriel Shelton (Washington) and Bryce Hamilton (Goldman). Minor quibbles: At two and a half hours (not counting intermission), the show is too long, sprawling epic though it may be. Also, there are too many beards in the cast; the men of that era were not quite so hirsute.

Wyn Moreno not only does double and triple duty as the show’s capable dialect coach and fight choreographer, he also moonlights as a playwright. Wayward Artists’ production of his play “Strong Arm,” based on “The Seagull” by Chekhov, opens Friday at Grand Central Art Center in Santa Ana.

The Paragon Ragtime Orchestra lived up to their reputation in presenting “You’re a Grand Old Rag: The Music of George M. Cohan” recently at La Mirada Theatre. Though they promised “all the hits,” the Paragon did not simply offer the standard greatest hits program today’s audiences have come to expect; the 11-piece ensemble also played sparkling renditions of everything from an eponymous rag composed for a minstrel show to waltzes from Cohan’s melodrama “The Yankee Prince.”

Conducted by Rick Benjamin, who founded the group while a student at Julliard, the orchestra performed authentic orchestrations of the composer’s songs as they would have been heard in the early 1900s. Colin Pritchard, who sang and danced in the style of Cohan, was a definite crowd pleaser, no less so with “Life’s a Funny Proposition After All” than “Give My Regards to Broadway” and “Over There!”

Benjamin’s suggestion of an annual Cohan festival brought rousing applause from the near sell-out crowd of 1200—who enthused over the collection of rare memorabilia loaned by Cohan expert David A. Collins, which decorated the lobby. Meanwhile, La Mirada Theatre kicks off their fall season with “Grumpy Old Men: The Musical” (Sept. 20-Oct. 13), and the special event “Gene Kelly: The Legacy” (Oct. 20), an intimate portrait of the innovative dancer/choreographer presented by his widow Patricia Kelly.