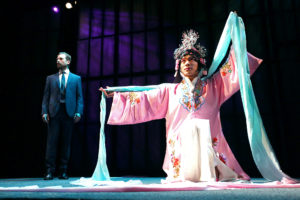 You’ve seen the movie, why bother with the play? In the case of David Henry Hwang’s “M. Butterfly” (through June 8 at South Coast Repertory), you’ll want to make the time to catch this revival—especially if you missed it on Broadway. The play exemplifies what live theatre does best, bringing this Tony ​Award-winning show to vivid life with an electricity the film adaptation—fine as it was—failed to capture.

Rene Gallimard, a disgraced civil servant, begins by telling us from his prison cell how his parents took him to see Puccini’s “Madama Butterfly” when he was 12, and how he became obsessed with it. Years later, as a diplomat in China, he sees it again and becomes entranced with Song Liling, the opera singer in the title role. The saga of their affair is a complex gender-bending drama (based on a true story and tweaked for this remounting) set during Mao’s Cultural Revolution.

If Lucas Verbrugghe is solid as Rene, Jake Manabat’s portrayal of Song is worthy of Broadway (he in fact understudied the role in the Julie Taymor production). Desdemona Chang’s direction is nothing less than superb, perfectly complementing the material. Sarah Ryung Clement’s costumes, Josh Epstein’s lighting and Andre J. Pluess’ sound design and original music all contribute significantly to the sublime end result.

Foreign films are the antidote to superhero movies and other afflictions of American cinema. Until the maroons who greenlight the junk flooding the multiplexes grow up (it could be a long wait), I’ll take my chances with flicks from European and Asian filmmakers, newcomer and veteran alike. Ash Mayfair’s debut film, “The Third Wife”—opening this week in selected So Cal theatres—is a fine example of the reason why. The young female writer-director behind this intimate coming-of-age drama set in 19th century Vietnam has a sensitivity rarely seen in Hollywood films and the artistic sensibility to deliver on her promises.

There’s a sensual, erotic quality to this picture, realized with the kind of subtlety you rarely see anymore. That quality is present in an early scene where teenage May’s new husband eats a raw egg off his bride’s body before intercourse—an appetizer for what follows—and other moments, such as when a now pregnant May tries to make love to her predecessor, the second wife, and is rejected. Mayfair’s vision is accentuated by Chananun Chotrungroj’s exquisite cinematography; with Trần Anh Hùng (“The Scent of Green Papaya”) aboard as artistic advisor, small wonder this Vietnamese-language movie is reaping awards at film festivals. 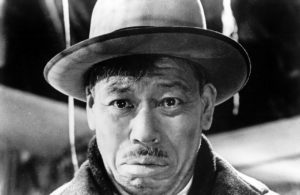 “Takashi Shimura, Chameleon of Japanese Cinema” by Scott Allen Nollen (available in paperback from McFarland & Co.) is the long overdue bio of the brilliant actor best known for his work with Akira Kurosawa. The author is to be commended not only for his research but his erudite discourse on Japanese cinema (including a brief history of the art form there) and Shimura’s role in it—something few Westerners could hope to attempt with such intelligent results.

It’s no surprise to learn Shimura (born Shoji Shimazaki) excelled as an athlete and acted in radio and theatre before he began his film career. From discussing his early work in the 1930s to his many efforts for Kurosawa—notably the woodcutter in “Rashomon,” the bureaucrat pondering the meaning of life in “Ikiru,” and the leader of “The Seven Samurai”—and such monster films as “Gojira” (“Godzilla”), this book is likely to stand as the definitive study of this versatile character actor. The meticulously compiled filmography is the most complete ever published in print or online and puts sources like IMDb to shame.