August Wilson at the Matrix 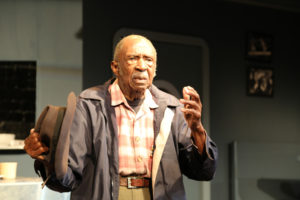 If you’re as passionate about live theatre as I am, I urge you to catch August Wilson’s “Two Trains Running” at the Matrix Theatre in Los Angeles—whether the trains are running or not. Yes, it’s black history month, but this installment in the playwright’s Pulitzer Prize winning American Century Cycle (which continues through Mar. 3) would be welcome any time.

Like all but one of the plays in the cycle, this one takes place in Pittsburgh’s Hill District, where the playwright grew up. As usual with Wilson the seriocomic drama is a character study, in this instance revolving around the offbeat regulars of Memphis Lee’s restaurant; it’s 1969 and they’re having a hard time coping with the fast changing world they live in.

The team responsible for last year’s award-nominated production of Wilson’s “King Hedley II” at the Matrix has another winner with the present effort. Produced by Sophina Brown and directed by Michele Shay with terrific attention to detail, “Trains” makes a strong impression from the outset; John Iacovelli’s scenic design is so authentic you want to pull up a stool and sit down at the restaurant counter and order up some grub, despite the timeworn checkerboard floor and broken jukebox—or maybe because of them.

Each of Wilson’s wonderfully colorful characters has a distinctive personality. My personal favorite is Adolphus Ward as Holloway, the laidback philosopher of the group who takes his time telling a story. Dorian Missick (loose-limbed Sterling, who’s looking for a job but not too hard) and Nija Okoro (waitress Risa, the object of his affection) also stand out in a first-rate ensemble; Alex Morris (West, the local undertaker) has a monologue about his late wife that is unarguably one of the show’s highlights.

The review of “Lizzie the Musical” has been deleted on request.