ABT and Perlman at Segerstrom, Agatha Christie at Fullerton’s Stages 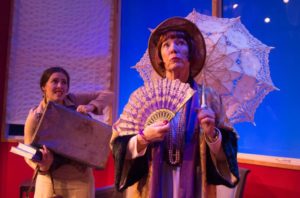 Emily Porr and Rose London in “Murder on the Nile” at STAGEStheatre.

I like to write about shows people can see. This post is the exception, although you might take a chance and show up at Fullerton’s STAGEStheatre this weekend, hoping for no-shows. Their production of Agatha Christie’s “Murder on the Nile” (through Feb. 10) is such a hot ticket it sold out even before it opened.

Christie’s best work? Not by a long shot—and there are a few fired in this cruise ship murder mystery, to be sure. But it’s good fun and director Phil Brickey keeps it moving, except where the author has tied his hands; the first act is bogged down by unnecessary exposition. Apart from that it’s pretty lively, thanks to Rose London, Jason Cook, Jessica Taylor Gable, Emily Porr, Lawrence Ingalls and others in the skilled ensemble cast, who play it broad enough to make it entertaining without going too far over the top.

American Ballet Theatre’s “Harlequinade” at Segerstrom Center for the Arts (mid-January) was a rare treat in the predominantly humorless world of ballet. Unless you attend a performance of “The Nutcracker” or the outlandish Les Ballets Trockadero de Monte Carlo, the most artful dancers rarely attempt to entice a smile out of you—but that isn’t the case with this show.

Most of the humor comes in the first act, an exaggerated pantomime wherein a penniless suitor (Harlequin) is hopelessly in love with a lady (Columbine) whose father wants to marry her off to a wealthy man; a sympathetic servant and a good fairy figure in the scenario. The more typical second act pretty much dispenses with the plot in favor of the usual exhibition dancing, with more joie de vivre than usual. Staged by Alexei Ratmansky with eye-popping costumes and scenery by Robert Perdziola, the show was everything you’d expect from ABT—in short, perfection.

If you missed “In the Fiddler’s House” at Segerstrom Concert Hall (mid-January), you missed one of the season’s best concerts. The Philharmonic Society of OC’s one-night-only reprise of this klezmer album and PBS special not only brought the incomparable Itzhak Perlman back to Costa Mesa but a hugely talented ensemble of musicians including Andy Statman, who might just be the world’s greatest mandolin player.