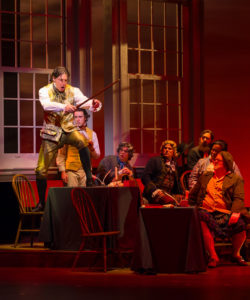 One thing is certain when it comes to Culture Clash—no one is safe. No nationality, ethnicity or religion, no political point of view or sexual preference gets a free pass from the group. A few people are always going to be offended, no matter what. Only one person walked out of the performance of “Culture Clash (Still) in America” I saw last week at South Coast Repertory (where they perform through Jan. 20); the rest of us stayed, nodding in recognition, roaring with laughter, and often sitting wide-eyed in surprise at the sheer audacity of Richard Montoya, Ricardo Salinas and Herbert Siguenza.

Orange County (“where old Republicans go to die”) predictably comes in for its share of ribbing in this show, as do Donald Trump, immigrants, the homeless, commercialism, and theatre itself. Salinas’ wickedly observed demonstration of how to tell Latinos apart by the way they dance salsa is worth the price of admission by itself. Few sketches are more outrageous than Siguenza’s sassy transgender woman from San Francisco.

Montoya’s outspoken, pot-smoking granny from Berkeley and his dead-serious Texas lawyer specializing in family separation speak to the group’s versatility; 35 years after they first launched their brand of pungent political and social satire Culture Clash is as sharp and vital as ever. While a few of the sketches in this show—a revival of one they did at SCR a decade ago, with some new material—are a little dated, there’s no arguing the timeliness or the relevance of most of it.

“ ‘1776 the Musical’? I’ve seen that,” you’re thinking. No, you haven’t, if you’ve only seen it on film. The seldom-produced stage show is a horse of a different color, as the current McCoy Rigby production at La Mirada Theatre for the Performing Arts (through Feb. 3) proves. For one, it’s much funnier than the 1972 movie version of the Sherman Edwards-Peter Stone Broadway play about the attempt to adopt the Declaration of Independence, entertaining as it may have been; for another, it connects us to the material in a way a film simply cannot.

Peter Van Norden has tremendous stage presence as Ben Franklin. No less impressive is James Barbour as Edward Rutledge of South Carolina, whose bull-headed stand on slavery threatens the valiant cause of the Continental Congress; it’s Barbour who stops the show with a second-act solo that’s not only a defense of his position but a blast at the hypocrisy of his colleagues. Other standouts in a strong ensemble are Andy Umberger (John Adams), Teri Bibb (Abigail Adams), and Michael Starr (Richard Lee of Virginia).

Glenn Casale’s first-rate direction and choreography makes the most of what could otherwise be a very stiff production, with 19 congressmen sitting in a room for much of the running time—no small feat with a mere 10 days of rehearsal. Jeff Rizzo’s musical direction, Stephen Gifford’s scenic design and Shon LeBlanc’s costumes contribute much to the proceedings. Many other venues in So Cal would do well to emulate La Mirada’s exemplary acoustics (the show transfers to Cal State Northridge for four final performances Feb. 8-10).