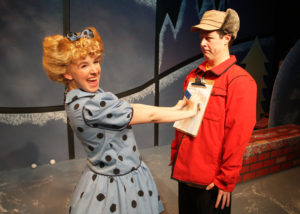 Yes, Virginia, he can still somersault into his hat. There are many reasons to catch South Coast Repertory’s 39th anniversary production of “A Christmas Carol” (before it closes Dec. 24), but surely Hal Landon Jr.’s trademark shtick with the topper is one that keeps audiences coming back time and again.

I once asked Landon at a rehearsal for the show how the Dickens he kept it fresh, playing Ebeneezer Scrooge for so many years. His answer? The children. They’re new to the show every year and that changes it up for him—in fact, his 9-year-old granddaughter Presley Coogan (double cast with Leah Kaplan) plays Tiny Tim this year.

Among those who really get into the spirit and give the show a little extra pizazz this time around are Gregg Daniel (as Jacob Marley’s ghost), Richard Doyle (The Spirit of Christmas Past) and William Francis McGuire (Fezziwig). If it would be hard to improve on Jerry Patch’s adaptation, the same can be said of Thomas Buderwitz’s set and Dwight Richard Odle’s costumes. And John-David Keller, who’s been directing the show for 39 years? Like the lovable curmudgeon in the top hat and red scarf, he’s still got what it takes to make it a memorable occasion.

Whether you’ve got tots or not, there’s a reason to put “A Charlie Brown Christmas” (at Chance Theatre in Anaheim Hills through Dec. 30) on your list this season. Charles M. Schulz’s iconic characters come vividly to life in this fast-paced 45-minute show; whether you’re feeling a little down like Charlie or the spirit moves you like Snoopy and Lucy, it’s impossible not to be uplifted.

It’s equally difficult not to like Charlie, who’s sent out to get the biggest and best tree for the Xmas play but selects the smallest and most pathetic one because “it looks like it needs me.” Matt Takahashi plays him wonderfully, though Dimithri Perera pretty much steals the show as Snoopy, who’s pure ham when he’s asked to play all the animals in the pageant.

The ensemble is aces, with Angela Griswold (Sally) perhaps most successful at channeling her inner child. The show, of course, is based on the TV special by Bill Melendez and Lee Mendelson, adapted for the stage by Eric Schaeffer. James McHale directs with just the right light-as-air touch, with Christina M. Perez’s costumes pretty much perfect.

I saw about 45 shows this year, all but one in or near O.C., fewer than in past years. Topping the list for me would be Chaim Potok’s THE CHOSEN (at the Fountain Theatre in L.A., admittedly based on one of my favorite novels) and Shakespeare’s THE WINTER’S TALE (New Swan at UC Irvine). The best of the rest, in no particular order:

WE WILL NOT DESCRIBE THE CONVERSATION (STAGEStheatre)