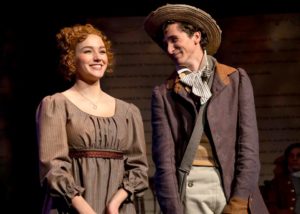 Zoya Martin and Kristofer Buxton (as Harriet Smith and Robert Martin) in “Jane Austen’s Emma” at the Chance. Photo by Benjamin Busch.

Carroll O’Connor once described to me a Broadway flop he auditioned for as resembling “a Christmas tree that topples over from the sheer weight of ornaments.” That pretty much sums up “Jane Austen’s Emma, The Musical” (at Anaheim’s Chance Theater through Dec. 23). The score, comprised of some 20 songs, amounted to an overload of treacle for me.

Granted, I’m not the target audience; the majority of the people around me last weekend were having a good time. Most of the issues I have are with the show itself—Paul Gordon’s book and lyrics—and not the production, which is up to the Chance’s usual high standards. Set in rural, 19th century England, the show is built around a rather unappealing character, entertaining though it may be.

Emma Woodhouse is an insufferable, meddlesome young lady who spends most of her time mooning over various beaus when she’s not playing matchmaker and toying with other peoples’ love lives. She’s more obnoxious in the musical than the novel, according to an Austen aficionado; Mandy Foster portrays her so adeptly there’s not much to like about her either.

Emma’s protégé, Harriet Smith (beautifully played by Zoya Martin) is by contrast hugely appealing, a winsome lass full of charm and personality—albeit yet another distortion of the author’s intent, so I’m told. Jeff Lowe (George Knightly) and Glenn Koppel (Mr. Woodhouse) excel amid a fine cast. Director Casey Long does what he can with the material and keeps things moving, though the musical is far too lengthy. Bill Strongin’s musical direction and Bruce Goodrich’s costumes enhance the show.

Caryl Churchill’s dark, razor-edged “Vinegar Tom” (closing Dec. 8 at Chapman University’s Waltmar Theatre) is an antidote for all the candy-coated entertainment of the season and the polar opposite of “Emma.” It’s a wild ride to say the least; if Arthur Miller’s “The Crucible” had been written by a feminist, it might resemble “Tom.”

Granted, a drama that navigates the intersection between sex and witchcraft and begins with a woman laying down with the Devil, is not for everyone. Indeed, female characters are subjected to so much emotional and physical abuse in this offbeat play, it is difficult to watch at times. But that’s exactly the point.

“Tom” touches on class differences, not unlike “Emma,” and takes place in more or less the same territory two centuries earlier during the English Civil War of the mid-1600s. Churchill is more concerned with sexuality and gender inequity than romance, the stuff of Austen; she viscerally depicts the reign of terror unleashed by one Matthew Hopkins, the self-proclaimed Witchfinder General of England. “All witchcraft comes from carnal knowledge,” the credo of a pioneering book on the topic, largely expresses his philosophy.