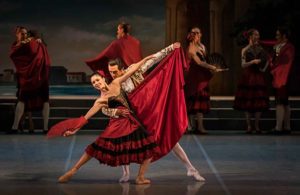 The current political situation is nothing to laugh at, that much is certain. Where is Will Rogers when we need him more than ever? Will and his wicked spot-on witticisms may be a thing of the past, but a modern day pundit named Sarah Burgess provides plenty to chew on and guffaw over in “Kings,” at South Coast Repertory through Saturday.

What goes on behind the scenes—in hotel lobbies and restaurants, on golf courses, at vacation resorts—is of chief interest to Burgess, who seems to have hidden behind every potted plant, pillar and golf cart to get the goods on the politicians and lobbyists who run the show. Burgess’ central character is Rep. Sydney Millsap, deliciously played by Tracey A. Leigh; her address to her Texas constituents is a highlight.

SCR co-founder Richard Doyle, as Senator McDowell, an old-timer weary of the bull involved in his job, is a superb foil for the ambitious Millsap. Their debate over money, corruption, his tax bill etc. is the arguable centerpiece of the play, and a dandy it is. Director Dámasco Rodríguez keeps it all running smoothly on a marvel of a set by Efren Delgadillo Jr.

St. Petersburg’s Mikhailovsky Ballet returns to Cost Mesa tonight with the Segerstrom Center for the Arts premiere of “Don Quixote.” Miguel de Cervantes’ tale of romance and heroism is well known through “The Man of La Mancha,” but the ballet adapted from the novel, choreographed by Marius Petipa and Alexander Gorsky, is quite a different animal.

Ivan Vasiliev, a favorite of SCFTA audiences who’s been called “the most exhilarating male dancer in the world,” returns with the show. He performs the role of Basilio (the besotted barber in love with Kitri, to whose aid Don Quixote comes) tonight and Saturday evening. Vasiliev, who made his solo debut with the Bolshoi Ballet in this role at age 17, has been seen here with the Bolshoi, in the Tour de Force dance gala “Reflections,” and in “Solo for Two” with Natalia Osipova.

“Don Quixote” continues through Sunday, with matinees both Saturday and Sunday.Mikhail Messerer, who became artistic director of the Mikhailovsky Ballet in 2017, trained as a dancer at the Bolshoi in the ‘60s. He has given master classes at the American Ballet Theatre, Paris Opera Ballet, and La Scala Ballet among others, and serves as the company guest teacher with The Royal Ballet Covent Garden.