“Other Place” at The Chance, “Maborosi” and “Rocco” on Blu-ray 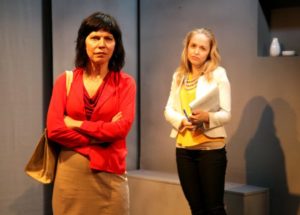 Jacqueline Wright and Krystyna Ahlers in The Other Place. Courtesy Chance Theater.

A less than capable cast and crew can wreak havoc on stage, especially with a non-linear play that jumps around. Sharr White’s “The Other Place” (at The Chance Theater in Anaheim Hills through Oct. 21) is just such a play, but fortunately it’s in very good hands in its OC premiere.

Life is getting weird for Dr. Juliana Smithton, an eminent neurologist we first meet as she’s giving a lecture. But it’s about to get worse. Reality is slip-sliding away and nothing can be taken at face value, especially her already difficult relationships with her husband and estranged daughter.

Jacqueline Wright’s performance (as Juliana) and Matthew McCray’s sensitive direction make this psychological mystery work like a charm—instead of sending it crashing to the ground in a heap—as the show leaps back and forth in time, shifting between monologues and dialogues, between the real and the imagined. Krystyna Ahlers (as Juliana’s daughter an other characters) provides solid support; Cricket Myers’ inventive sound design is a plus.

Yasujiro Ozu influenced world cinema when he slowed down his films to a glacial pace, making brilliantly observed commentary on everyday life. But there was only one Ozu. Hirokazu Kore-eda’s debt to the maestro is clear in his 1995 film “Maborosi” (now available on DVD and Blu-ray from Milestone Film & Video) but the picture suffers by comparison.

This tale of love and loss will prove too slow-moving for some, as it did for me; still, there is much to recommend this visual poem, especially for those who have mastered the art of meditation. Masao Nakabori’s cinematography and Chen-Ming Chang’s music enhance Kore-eda’s film debut immeasurably.

“Rocco and His Brothers,” Luchino Visconti’s favorite of his films (also available on DVD and Blu-ray from Milestone), is a compelling story about a family striving for a better life. The picture, which won the special jury prize at the 1960 Venice Film Festival, made stars of Alain Delon, Annie Girardot and Claudia Cardinale.