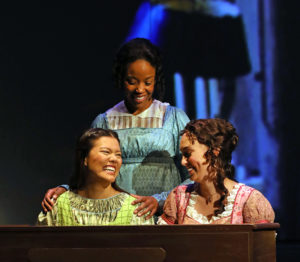 South Coast Repertory pushes the concept of colorblind casting to the edge with their current production of Jane Austen’s “Sense and Sensibility” (in Costa Mesa through Sept. 29). Purists and history buffs may object at first glance to the multi-ethnic ensemble gracing the stage, but they’ll be quickly forced to admit there isn’t a member of the talented cast who can’t handle the demands of this turn-of-the-19th century English romantic drama. It ain’t Shakespeare but still the language makes unusual demands on the performer, and the acting here is first class across the board. That said, five interracial couples may be a bit much.

Hilary Ward and Rebecca Mozo head the cast as Elinor and Marianne Dashwood, the siblings forced out of necessity to make good choices in marriage partners, with their family’s future at stake. They make strong impressions as they grapple with the realities of being a middle class woman in that era—as does Preston Butler III, whose Willoughby sweeps impulsive Marianne off her feet. However it’s Desireé Mee Jung as Margaret, the youngest of the three Dashwood sisters, who largely” steals the show with her childlike reactions to the goings on; Abigail Marks is another standout as Fanny, the wealthy but crass sister-in-law.

Director Casey Stangl does a masterful job—as usual—in handling the intricacies of Jessica Swale’s fine adaptation. Both deserve kudos for making the story work for a contemporary audience. They’re ably aided and abetted by Maggie Morgan’s costume design and Martín Carrillo’s original music/soundscape. You don’t have to be an Austen devotee to follow the play, or pick up on the nuances of what transpires; the show is a tad long at two and a half hours plus intermission, though.

At the ripe old age of six, Alchemy Theatre Company seems to have come of age. No longer are they content to simply do good work, but truly excel. “Cyrano,” Jeff Lowe’s adaptation of Edmond Rostand’s “Cyrano De Bergerac” (running in rep with Alchemy’s “Romeo and Juliet” at STAGEStheatre in Fullerton through Sept. 23) is a case in point. There isn’t a false note in the adaptation—which mixes classical and contemporary language—nor a weak link in the 15-member ensemble.

Lowe has cleverly tweaked this tale so that Cyrano is female—along with her outsized proboscis, she’s got a lot more deal with when she falls hopelessly in love with her cousin Roxane than Rostand’s hero ever did. It’s a wonderfully challenging role for a woman, and Madeleine Claire Colburn plays it with intelligence and strength under Laura Hathaway’s attentive direction.