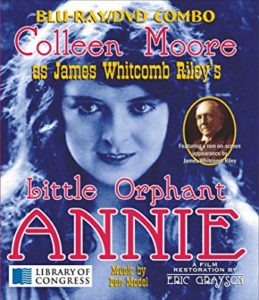 What are the chances of seeing a beautifully restored version of “Little Orphant Annie” (1918), starring a youthful Colleen Moore in her earliest extant movie? Pretty good, now that film historian and preservationist Eric Grayson has decided to make this long-held dream a reality, painstakingly putting together five different prints of this silent feature with the cooperation of the Library of Congress and recreating the color tints it originally had. The movie, not to be confused with the similarly named cartoon strip, is based on the work of poet James Whitcomb Riley, a contemporary of Mark Twain.

“Annie” is the charming story of an adolescent (Moore) who spins tall tales of witches and goblins for small children, and survives an abusive uncle to bask in the warmth of a loving family who takes her in. The creatures of the girl’s imagination are vividly depicted in this pioneering fantasy film, which includes a rare screen appearance by Riley himself. Ben Model provides the pleasant, appropriately fanciful score for the movie (available in a Blu-ray/DVD combo set, and slated for Cinecon this fall).

Model has also unearthed for us an offbeat collection of experimental films from the Library of Congress, offering them under the title “The Kinetophone: A Fact! A Reality!” (available on DVD from Undercrank Productions). Never mind that the French beat Thomas Edison to the punch, marrying sound to film more than a decade before these short films were made in 1913; these artifacts are nothing less than fascinating.

The shorts incorporating singing and dancing (“Edison Minstrels” and “Musical Blacksmiths” with future silent film star Shirley Mason), hold up best. “The Deaf Mute,” an outdoor Civil War drama, benefits from the stilted acting that impairs other films. “Jack’s Joke” is a must-see, at least for Laurel & Hardy fans, as it co-stars an impossibly young Arthur Housman. These six-minute films, which were originally shown in vaudeville houses instead of cinemas, have not been seen in more than 100 years; a short but informative documentary is also included.

Quick, who was the only presidential candidate ever imprisoned for his campaign platform? Hint: He’s the subject of Yale Strom’s outstanding new documentary, “American Socialist: The Life and Times of Eugene Victor Debs.” Never heard of this iconic political activist and five-time candidate for the White House? How about FDR’s New Deal, or maybe Bernie Sanders? Debs (1855-1926) inspired both with his progressive ideas, for which he was ridiculed and imprisoned.

Debs, who called the 4th of July “the ultimate triumph of Socialism,” understood the inequality between the working class and the rich, and was able to communicate it to the masses. “Working Class Hero” might have been a better title for this film narrated by Amy Madigan, a passionate exploration of the man and his era which could not be otherwise improved. Strom produced and created the music for the film (available on DVD from First Run Features), which he co-wrote with Elizabeth Schwartz, and I’m proud to call them friends.