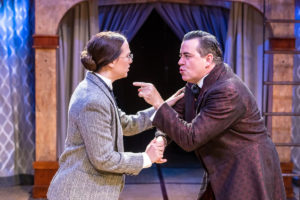 How many “Macbeths” and “Twelfth Nights” will audiences for Shakespeare support? An infinite number, it seems. Will people come to see something of the Bard’s so seldom staged most have never even heard of it, for example “The Winter’s Tale”? Yes, as it turns out—even in the heat of summer. New Swan Shakespeare Festival, in its seventh season at UC Irvine (through Sept. 1), is doing what longer-running and better established such events should do but seldom dare, in offering the rarely seen tragicomedy.

“Tale” may be an odd bodkins of a play in the Bard’s canon, in that its first half is inarguably a tragedy—driven by the Othello-like jealousy of Leontes, King of Sicilia—before it abruptly switches gears and gives us a romantic comedy in the second act—centered on the love life of Perdita, a shepherdess who turns out to be the king’s daughter. Kayla Kearney nearly steals the show in the role of Paulina, the impassioned wife of the king’s advisor, though Jesse Sharp (Leontes), Meg Evans (Camillo, a Portia-like counsel), Thomas Varga (Autolycus, a wily vagabond) and others shine among the first-rate cast; Beth Lopes directs with aplomb.

Meanwhile, Fullerton’s STAGEStheatre is producing something called “All the World’s a Grave,” which bills itself as “a new play by William Shakespeare written by John Reed.” This is reasonably accurate, as much of the play (being performed through Aug. 26) derives from the work of the Bard or sounds like it does, though the show is concocted by Reed. Many if not most of the characters will be recognizable to audiences regardless of their familiarity with Shakespeare (which is not a prerequisite)—Hamlet, Macbeth, Romeo and Juliet, Lear etc.—who are set down in a sort of parallel universe where they interact with each other independent of their renowned relationships.

Act One is muddled and overly ambitious, introducing characters and plot threads that never quite add up. It’s not until Act Two the play finds its focus: Iago, without Othello around to deceive and torment, drives Hamlet insane with jealousy, poisoning his relationship with his wife, Juliet. Christine Cumming’s Iago is deliciously treacherous, while Abel Garcia’s Hamlet is so volatile he’s scary. Marcus J. Andrews’ Macbeth and Jill Cary Martin’s Lady Macbeth exude quiet strength; Rose London’s Lear makes a powerful impression despite the brevity of her role. Jill Johnson’s attentive direction aids immeasurably.