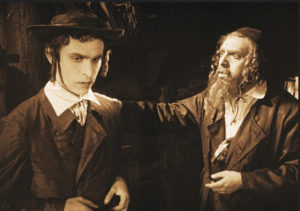 Ernst Deutsch and Avrom Morewski in “The Ancient Law.”

There’s a little community called Niles in the Bay Area, south of Oakland, that has a unique claim to fame. In the early days of cinema, Charles Chaplin made a series of comedies there and “Broncho Billy” Anderson, the movies’ first cowboy star, made westerns. More than 100 years later, the Niles Essanay Silent Film Museum still remembers and celebrates that era, showing silent movies year-round in their vintage 1913 Edison Theater. The museum’s annual “Chaplin Days” (July 13-15) offers tours of silent film locations in Niles and San Francisco this year.

Other special events include a symposium on physical comedy as performed by Chaplin, Keaton, Laurel & Hardy and others, hosted by Dan Kamin (who coached Robert Downey Jr. for “Chaplin”); a presentation on Chaplin locations in Hollywood and the Bay Area by film historians Marc Wanamaker and John Bengston; a talk on Chaplin as a director; tours of the museum; a Charlie look-alike contest; and of course lots of Chaplin films, including some made in Niles.

Before Hitler turned the German film industry into a propaganda machine, it produced a remarkable number of films almost unrivaled for their artistry. “The Ancient Law” (1923), beautifully restored by the Deutsche Kinemathek (newly available in a Blu-ray/DVD Dual Format Edition from Flicker Alley) is not only part of that legacy but a key puzzle piece of forgotten German-Jewish film history. Directed by E. A. Dupont (best known for “Variety”), it’s the story of Baruch Mayer, an Orthodox village rabbi’s son who wants to become an actor.

The father is appalled, naturally, at the boy’s desire shoot for a career in the theatre and “go out into the world and achieve greatness,” admonishing the son “the Jew’s strength is rooted in the ghetto.” Beyond the obvious parallels to “The Jazz Singer” it’s an enlightening time capsule of Jewish culture, made during the mass migration of Jews from Eastern to Western Europe (which provoked rising anti-Semitism) but set during an earlier period of mass migration in the 1860s.

Ernst Deutsch stars as Baruch, with Henny Porten (“Anna Boleyn”) as a Viennese archduchess who becomes his patroness. The dual-disc set offers two scores: a sublime collaboration between Donald Sosin and Alicia Svigals and an orchestral score by Philippe Schoeller. Bonus materials include a rare excerpt from an otherwise lost documentary with glimpses of Dupont directing the picture, and contemporaries such as Fritz Lang.

The voices of the Soviet Jews murdered by Hitler and Stalin during the Holocaust were silenced forever—or so it has been believed until now. “Yiddish Glory: The Lost Songs of World War II” (available on CD from Six Degrees Records) is a new recording of 18 songs created during the war at the behest of ethnomusicologists and presumed lost. These grass roots testimonies of German atrocities—written by soldiers, refugees, victims and survivors—are full of hope and humor, and very much relevant today.

“Stefan Zweig: Farewell to Europe” (2016) tells the true story of a famed Austrian writer driven into exile in South America during World War II. This fine film (available on DVD from First Run Features) illustrates the plight of Jewish artists during the rise of Nazi Germany with strong impact. Josef Hader and Barbara Sukowa star in solid, understated performances.