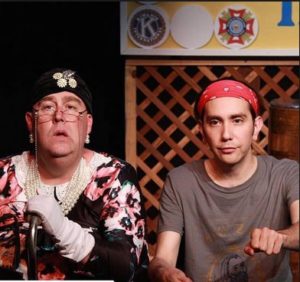 “Greater Tuna” is served up not in a casserole dish, but by actors who know what they’re doing when it comes to satire. It would be easy to go over the top—after all, this zany, comedic look at the denizens of a tiny town somewhere in Texas lends itself to broad strokes, as creators Jaston Williams, Joe Sears and Ed Howard undoubtedly know. But Brian J. Cook, who doubles ingeniously as actor and director in STAGEStheatre’s current production (in Fullerton though June 24), has a keen sense of just how far is too far.

Tuna, Texas, has more than its share of busybodies, know-it-alls, knuckleheads and pains-in-the-butt, but it also has its endearing types. Cook and Andrew Villarreal tackle all 20 characters in the show, proving themselves remarkably versatile actors as well as quick-change artists. Heather Enriquez’s creative costumes are instrumental to the fun. Small wonder that “Tuna” has become a cottage industry, spawning three sequels.

It’s in Act II of “My Life in Two Acts” (presented by The Wayward Artist at Santa Ana’s Grand Central Art Center through June 23) Tina A. Burkhalter reaches perfection, in a wickedly funny take on online dating. Bold body language and outrageous facial expressions fuel her performance as she fearlessly mocks herself, her failure to find a steady romantic relationship, and the jerk who asked another woman for her phone number during her worst online dating experience.

Act I of Burkhalter’s one-woman show—actually two 45-minute solo pieces—is a more serious exploration of the single life, in which she acknowledges she’s “The Common Denominator” in every bad relationship. It’s a well-written play but she doesn’t fully connect with the audience at the outset; when she lightens up a bit and breaks into a smile after 10 minutes or so, she lights up the room. And when she ramps up the audience interaction in the second piece there’s no stopping her, especially under Katie Chidester’s sharp-edged direction.