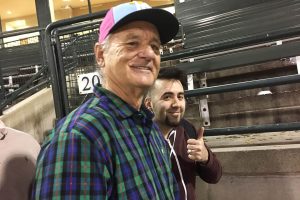 “The Bill Murray Stories,” courtesy NBFF. “Little Black Shadows” by Kemp Powers (at South Coast Repertory through Apr. 29) is as much about the power of storytelling as it is about the story being told. The tale—of young slaves who acted as servants to their master’s privileged children—was one the playwright found mothballed in a plantation museum, in the form of narratives collected in the 1930s. Powers has turned it into something magical, enhanced even more than usual by SCR’s ace production team.

Giovanni Adams and Chauntae Pink, as the slaves or “shadows” at the heart of the story, lead a fine ensemble cast. Mary Adrales’ direction is abetted by David M. Barber’s stellar scenic design and Hana S. Kim’s Projection & Puppet Design. Audience members who have a problem with the dialect employed, however authentic it may be—and the use of the N word—may be distracted from the play.

The 19th annual Newport Beach Film Festival opens Thursday and runs through May 3. The event, which has attracted over 55,000 attendees to Orange County in the past, will showcase more than 350 films from 50 countries. NBFF offers the largest shorts program within a major U.S. film festival, showing well over 200 short movies; this year sees the introduction of a new documentary film program that celebrates emerging and prominent gourmet chefs.

Documentaries are always a highlight of NBFF. This year’s crop includes “The Bill Murray Stories,” in which a documentarian tracks random encounters with the actor; “California’s Forgotten Children,” which delves into child sex trafficking; “Turning Point,” about Alzheimer’s disease; “Time Well Spent,” about four surfers exploring the waves of Panama and reaching out to people in need while there; and “Getting Naked: A Burlesque Story,” about four contemporary performers in New York City.

Among the International films at the festival are “ULAM: Main Dish,” a celebration Filipino food and Filipino culture; “End of Summer” (China), about a young boy bonding with his elderly neighbor over the World Cup fever that is sweeping the country; and “The Desert Bride” (Chile), about a live-in maid in Buenos Aires forced to take a job in a distant town. The vintage film offerings include John Wayne in Howard Hawks’ “Red River” (1948), and Disney’s animated “Peter Pan” (1953).

The Collegiate Showcase presents films by student filmmakers from UC Irvine, Chapman University, OC School of the Arts and other local institutions. The Free Industry Seminar Series includes Cinematography Master Class, a Screenwriting Seminar, and Building a Career in Animation Presented by Women In Animation.