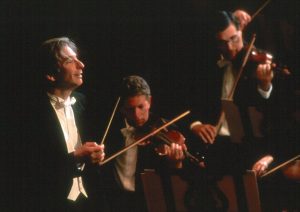 If you read the publicity put forth by the Philharmonic Society of Orange County, you’ll note Michael Tilson Thomas is not only a National Medal of Arts winner but presently the longest-tenured music director of a major American orchestra. That’s far too modest, in my opinion—MTT (as he’s known to his admirers) is far and away the greatest conductor I’ve ever seen. I’ve long since forgotten the program I saw him offer in 2005 but his performance on the podium was nothing less than phenomenal. Talent runs in the family; he’s the grandson of legendary Yiddish actors Boris and Bessie Thomashefsky.

The San Francisco Symphony (which Thomas has led since 1995) is making its first Orange County appearance in nearly 10 years on Mar. 29 at the Renée and Henry Segerstrom Concert Hall. They’ll present Mahler’s iconic Fifth Symphony, the masterwork of a composer MTT has long championed. Gil Shaham, who may be the best violinist you’ve never heard of, joins the ensemble for Alban Berg’s Violin Concerto.

The Philharmonic Society’s Eclectic Orange Series brings pianist Joyce Yang back to OC in a new collaboration with the award-winning Aspen Santa Fe Ballet on Apr. 5. The program at the Irvine Barclay Theatre will feature works by renowned choreographers Jorma Elo, Jirí Kylián, and Nicolo Fonte, set to the music of Philip Glass and Leoš Janáček.

Yang, who made her mark at age 19 by taking the silver medal at the 2005 Van Cliburn International Piano Competition, will present the world premiere of a new work by Elo, a Philharmonic Society co-commission. Fonte’s “Where We Left Off” is accompanied by Glass’ “Mad Rush” and “Metamorphosis II,” while Kylián’s “Return to a Strange Land” is set to excerpts from Janáček’s “Diary of One Who Disappeared,” “On an Overgrown Path” and Sonata “1905.”

Now that the Irish television drama “Striking Out” is in its second season, I’ve finally caught up with the first (available on DVD from Acorn Media). Tara Rafferty (Amy Huberman in an award-winning performance) is a solicitor, or an attorney as we call them, who strikes out on her own after she catches her boss and fiancé Eric cheating on her with a colleague. This series created by James Phelan is well written and well acted but apart from the Dublin and rural Wicklow locations, a few idioms unique to Ireland and of course the accents, there’s little to distinguish it from an American TV show.