Joshua Bell and Beethoven’s 6th at Segerstrom, Woody Allen’s “Bullets” at the Gem 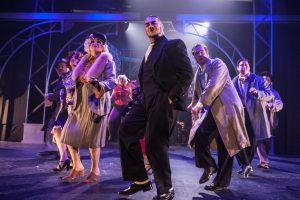 Woody Allen may have put one over on Broadway with the musical adaptation of his 1994 film “Bullets Over Broadway”—to the tune of six Tony nominations—but So Cal has higher standards. At least I do. Don’t get me wrong, it’s an entertaining show (playing at The GEM Theater in Garden Grove through Mar. 18) but the story has been shaved to the bone; those who enjoyed the movie about a playwright whose new musical is financed by a mobster may well be disappointed.

“Bullets” (written by Allen with musical adaptation and additional lyrics by Glen Kelly) is crammed with hit songs from the 1920s including evergreens like “Let’s Misbehave” and “Runnin’ Wild.” Its core is much like the soundtracks of Allen’s films, but at the sacrifice of his trademark one-liners. Not what I’d call a fair swap. As audiences might well ask, “Where’s Woody?”

It’s largely to director/musical director Damien Lorton’s credit that One More Productions’ revival is as much fun as it is. There are some fine performances here—notably OC stalwart Beth Hansen as an aging diva, Robert Edward as a gangster who thinks he’s a writer, and Nicole Cassesso as a ditzy moll and wannabe actress. There are also some stunning costumes (designed by Larry Watts) and some inspired choreography (Heather Holt-Smith). But at the end of a very long evening it’s little more than a garden variety jukebox show stuffed with vintage popular music.

Seldom does a concert season go by anywhere without Beethoven’s 6th, I suspect. But equally seldom do we have the good fortune to hear the Pastoral Symphony performed by Joshua Bell and the Academy of St Martin in the Fields. That opportunity comes to Costa Mesa’s Renée and Henry Segerstrom Concert Hall this Friday, Mar. 9, brought to us by the Philharmonic Society of Orange County.

The 6th was premiered in 1808, the same evening as the 5th. If it seems less revolutionary today it is equally radical, notes Tom Service of The Guardian, “in some ways, more so. I think both pieces are experiments in symphonic extremity, because both are pushing completely different musical boundaries to their limits, and beyond.”

Bell, who was named Music Director of the Academy in 2011, is the only individual to hold the post since Sir Neville Marriner formed the celebrated chamber orchestra in 1958. Friday’s program also features Mendelssohn’s Overture from A Midsummer Night’s Dream, Wieniawski’s Violin Concerto No. 2, and Meyer’s Overture for Violin and Orchestra—written for violinist Bell and the Academy by composer and double bassist Edgar Meyer. The concert begins at 8 p.m. with a pre-concert lecture by Brian Lauritzen at 7p.m.