Q&A with Simon Levy, director of “The Chosen” at The Fountain in L.A. 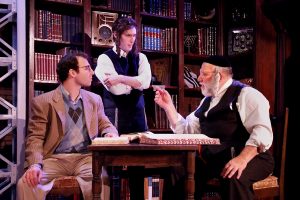 “The Chosen,” based on Chaim Potok’s classic novel about two brilliant young men growing up five blocks and worlds apart in World War II Brooklyn, has been transformed into a play that’s somehow even more compelling than the book. Adapted by Potok and Aaron Posner and newly revised by Posner, it continues through Mar. 25 at The Fountain Theatre in Los Angeles, on the edge of Los Feliz.

Director Simon Levy makes striking choices in staging the play, beginning with a baseball game between Reuven Malter, an Orthodox Jew (Sam Mendel), and Danny Saunders, an ultra-religious Hasid (Dor Gvirtsman), that turns into a Holy War; Levy’s use of sound effects is particularly noteworthy. The cast of four, fleshed out by fathers David Malter (Jonathan Arkin) and Reb Saunders (Alan Blumenfeld), is uniformly excellent; Blumenfeld’s outsized performance almost knocks you out of your seat.

Levy, who previously produced Posner’s adaptation of Potok’s “My Name is Asher Lev” at the Fountain, agreed to a Q&A.

Q: I feel “The Chosen” is The Great Jewish American Novel, but it’s universal in its themes. What resonates most with you?

A: The play begins, “Ayloo v’ayloo.” “Both these and these.” Among the myriad themes that run through the book, Potok gives life to the concept that we can bridge chasms, that we can hold opposing ideas and views that can both be true—Zionism and Hasidism, the secular and the sacred, the modern and the traditional, adolescence and adulthood, fathers and son, the head and the heart. In this polarized world we live in we need to be reminded that not everything is about being right, about winning, that it’s possible, just possible, that two rights can exist at the same time.

Q: What compelled you to choose “The Chosen” to direct?

A: I was searching for a project that would be an antidote to all the negativity and toxicity we’ve endured for the past two years. I wanted to say to our audiences, “Even if we’re different, even if we disagree, we can still respect each other and communicate our differences with tolerance and understanding.” Not everything has to be right or wrong, left or right, good or bad, fake or real. Human relationships are far more complex than that. We are a complicated species. Let’s honor those differences without resorting to rancor and bullying and polarization.

Q: I was struck by the utter simplicity of the adaptation when I read the script (at least the original version).

A: Potok and Posner found a way to streamline the play so it focuses on the fathers and sons, two households with opposing points of view, and how a friendship can blossom in spite of those differences. It streamlines the coming of age story for both Reuven and Danny while giving life to the deeper themes in the novel.

Q: What was the most challenging aspect of the directing the play?

A: I wanted to make sure I got it right. The specificity of both the Hasidic and Orthodox aspects of the play require authenticity. Verisimilitude is very important to me. Although I’m Jewish, I’m a typical modern American secular Jew. So it was important to me to do in-depth research that included consulting with two rabbis, Rabbi Jim Kaufman and Rabbi Daniel Bouskila. Both were immeasurably helpful! I couldn’t have done it without their wisdom and generosity. Not only did they help with the Hebrew and Yiddish and prayers and clothing and books and behavior and the cultural underpinnings of Orthodox and Ultra-Orthodox Judaism, they also shared their time with the cast and our designers.

Q: You did a tremendous amount of research for the play.

A: I must have watched, listened to, dozens and dozens of YouTube videos, music recordings, and viewed hundreds of photographs. I also read through all the commentaries in the 50th Anniversary Edition of “The Chosen,” as well as Chaim Potok’s exhaustive “Wanderings: History of The Jews”… And, “Judaism For Dummies,” which is actually a pretty fabulous book. Like most directors, I love the research part of my job.