“Importance of Being Earnest” at the Attic, “Dear Brutus” at Stages 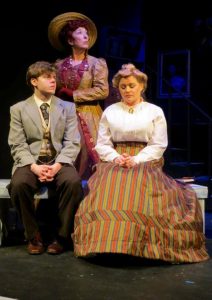 Two visits to the theatre this weekend to see two actor friends, after a much-needed hiatus of more than a month; plenty of family drama, mind you. J.M. Barrie’s rarely-staged 1917 fantasy “Dear Brutus” (through Feb. 11 at Fullerton’s STAGEStheatre) is a play about second chances that’s been called “Peter Pan for adults.” The underlying message, to quote one character, seems to be, “We have the power to shape ourselves.”

The ensemble cast did a fine job under Alexis Stary’s direction with a stellar performance coming from the youngest member, a sprightly little redhead by the name of Scarlett Clark (Margaret). Stand outs also included Paul Burt (Lob) as an eccentric host who invites an odd selection of guests to his house on a summer eve; and Kerri Hellmuth (Mabel) and Elizabeth Rodrigues (Joanna) as two of the guests.

First performed in 1895, Oscar Wilde’s wickedly funny Victorian era farce “The Importance of Being Earnest” (at the Attic Community Theater in Santa Ana through Feb. 4) rarely gets a production worthy of it. Bob Fetes’ attentively directed staging, buoyed by a talented cast, exceeded my expectations—no small accomplishment considering the cavernous space of the venue. The uncredited costumes (designed by Rebecca Roth in conjunction with the Long Beach Playhouse) did much to enhance the show.

Rose London triumphed as the no-nonsense dowager aunt Lady Bracknell, as did Kayla Agnew (as Cecily). Kyle Patterson (Jack), Maggie King (Gwendolyn) and Mark Bowen (as the butler) were exceptional in their characterizations, giving this Wilde soufflé about using the well-crafted fiction to escape one’s obligations just the light touch it requires.