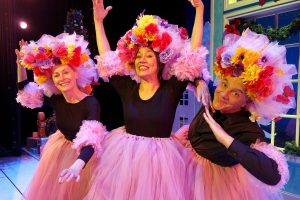 Having fun yet? Sandra Tsing Loh’s “Sugar Plum Fairy” (at South Coast Repertory through Dec. 24) is sure to double your pleasure this season whatever your religious preference; despite its Christmasy trappings, it has a multicultural elf aboard its sleigh to celebrate Chanukah and Kwanzaa. In addition to her first-rate abilities as a storyteller, Loh displays a genius for audience involvement here—singalongs, balloons, popcorn and more—that’s bound to pump up the fun quotient for your holidays.

As with Loh’s previous SCR outing, “The Madwoman in the Volvo,” it’s essentially a solo show for three actors; Tony Abatemarco (who’s especially good) and Shannon Holt support Loh playing mother and sister, schoolmates, ballerinas and other characters. Under Bart DeLorenzo’s canny direction, “Fairy” hilariously relates Loh’s adolescent experience auditioning for a dance school production of “The Nutcracker” when she isn’t making local jokes and joshing with the audience.

Speaking of fun, tops among TV shows newly available on home video is “Doc Martin: Series 8” (on DVD and Blu-ray from Acorn Media) with Martin Clunes, Caroline Catz, Ian McNeice, Eileen Atkins and other regulars. Despite the show’s endurance, I’m happy to report they’re all back in fine form, as are the scripts. The set includes 8 episodes, plus a bonus disc. I can also recommend an earlier Clunes program (on DVD from Acorn) equally perfect for binging, the tragicomic “William and Mary” co-starring Julie Graham.