“Mr. Burns” at Costa Mesa Playhouse, “Appropriate” at Chapman U 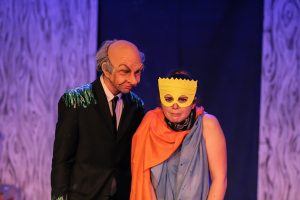 Can a play recover from an unsatisfactory first act, one that leaves you frankly wondering, what am I doing here? Absolutely, if Anne Washburn’s “Mr. Burns, A Post-Electric Play” and Branden Jacob-Jenkins’ “Appropriate”—both of which opened in Orange County last weekend—are any indication. Neither of these plays worked at the outset for me; both recovered enough after the first intermission to make me stick around for what were hugely rewarding third acts.

“Mr. Burns” (Alchemy Theatre Co. at Costa Mesa Playhouse through Dec. 16) is an offbeat musical comedy about what could happen to our beloved pop culture after the collapse of society as we know it, inventively directed by Jeff Lowe. The first act features a group of survivors attempting to recall the plot of their favorite episode of “The Simpsons” in bits and pieces, ad nauseum. The bizarre, stylistically different second act does nothing to prepare you for the original mini-musical that forms the finale, which gives you hope for the world in general not to mention the genre of musical theatre.

“Appropriate” (at Chapman University’s Waltmar Theatre through Dec. 9), a family drama about racism and racial violence in America, manages to survive a laborious first act that accomplishes little. It more or less gets to the point in the second act, with the discovery of a shocking photo album that proves a source of humiliation for some family members, and taps into the unlikely humor of the situation to give us a third act that’s nothing short of brilliant, all under the direction of Trevor Biship.

Both plays put talented ensembles through their paces, with Brooke Lewis, Phil Nieto, Emily Lappi and others playing a surprising array of characters with great finesse in “Mr. Burns.” With the exception of McKenna Ryan, who annoyingly shrieks her way through the first act, the cast of “Approriate” (Maggie Dorfman, Madison Gallus et al) proves highly capable. Christopher Scott Murillo’s scenic design for the latter is almost worthy of South Coast Rep.