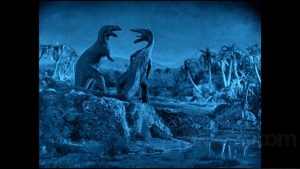 If there was ever a silent film I never wanted to see again after my first viewing it was “The Lost World,” the 1925 original I clapped eyes on as a teenager. Or so I thought.

I was bowled over when this prehistoric adventure flick surfaced at the San Francisco Silent Film Festival this summer in a newly restored version, in spectacular image quality with about 10 minutes of rediscovered footage. Easily the surprise highlight of the event. For those who missed it, I’m happy to report it’s now available in a Blu-ray edition from Flicker Alley (a tandem effort with Lobster Films and Blackhawk Films).

Based on a novel by Arthur Conan Doyle, “World” stars Wallace Beery, Lewis Stone and Bessie Love, who set out to find a fabled plateau in the jungles of South America. It was earmarked for extinction four years after its release to make way for another “creature feature” it somewhat resembled called “King Kong,” with the result that it’s been seen in crappy-looking abridged versions ever since—until now. The 110-minute Blu-ray release features a terrific new score by Robert Israel, restored outtakes, an essay on the restoration by Serge Bromberg of Lobster and more.

“Lon Chaney: Before the Thousand Faces” is a DVD compilation (available from Undercrank Productions) of three rare Universal features or what remains of them, from the early years of the actor’s career. The importance of this 83-minute collection lies more in the scarcity of the performer’s pre-1920 work than in the quality of the films themselves; it’s a must-see for Chaney fans, however.

Lon Sr. co-stars as a young husband—and a much older bearded version of the same character—in “A Mother’s Atonement” (1915). He plays the small supporting role of a doctor in “If My Country Should Call (1915), and is a “half-breed” hopelessly in love with a woman in “A Place Beyond the Winds” (1916). Jon C. Mirsalis’ scores are first-rate; he also did the restorations, newly scanned from 35mm archival prints.

Two Marion Davies features from 1922, “The Bride’s Play” and “Beauty’s Worth” (both on DVD from Undercrank Productions) offer an opportunity to see the actress shortly before attaining stardom. Both are entertaining romantic dramas (the former is set unconvincingly in Ireland), sweet stories that have Maid Marion forced to choose between a pair of suitors, and both releases are handsomely scored and produced by Ben Model.

“Whispering Shadows” (also on DVD from Undercrank) is a 1921 occult film lost to the ravages of time until now. Robert Barrat (who may be recalled from his supporting roles in such ‘30s films as “Heroes for Sale”) is wrongfully accused of embezzlement, his innocence known only to a dead man in this intriguing feature. “The Devil’s Assistant” (1916), a short film also on the disc, is plagued by a weak storyline and overly broad acting but offers some striking visuals—notably red-tinted scenes that take place in Hell. Andrew E. Simpson provides new theatrical organ scores for both films.