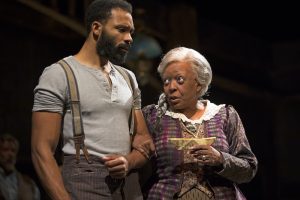 August Wilson’s “Gem of the Ocean” (at South Coast Repertory through Nov. 11) is one of those quirky character-driven plays it’s hard to get a handle on at first. It may be “monologue-heavy” as one of my fellow playwrights has observed, and it takes a while for something resembling a plot to develop. But my advice is to sit back and enjoy the ride, and not to miss it if you appreciate the distinction between live theatre and pre-recorded media. Vive la différence! After all, Wilson made up his own rules when it came to playwriting.

“Gem” has one of the richest characterizations of Wilson’s oeuvre in Aunt Ester, the 285-year-old matriarch who anchors the tale—which employs as a backdrop the migration of African Americans from the rural South to the racist North in search of a better life, in the first decade of the 20th century. The 2.5 hour length of the play affords Ester and others time to tell leisurely stories, creating a spellbinding tapestry of language.

Director Kent Gash has meticulously assembled a first-rate ensemble cast, most notably including L. Scott Caldwell as the feisty Ester, but also Cleavant Derricks (Solly Two Kings), who reminisces about his first taste of post-slavery freedom in Canada; Preston Butler III (Citizen Barlow), who visits Ester to have her “wash his soul clean”; Shinelle Azoroh (Black Mary), his love interest; and Arnell Powell (Caesar), her hot-headed brother. Scenic designer Edward E. Haynes and his colleagues collaborate to produce one of the best shows I’ve ever seen at SCR in 30+ years of attendance on and off.

Binging on Britcoms is easier than ever thanks to Acorn Media. Not that I do a lot of it, but lately I’ve been gobbling up BBC adaptations of P.G. Wodehouse on DVD like there’s no tomorrow, first with the juicy “Blandings” and then “Wodehouse Playhouse.” Timothy Spall and Jennifer Saunders are wonderfully wacky in the former; John Alderton and Pauline Collins wrap their tongues around Wodehouse’s whimsical dialogue in delightful fashion (her vocal range is phenomenal) in the latter.

Few British TV shows are more consistently satisfying than “Doc Martin,” featuring the ever reliable Martin Clunes as village curmudgeon/physician and set indelibly on the coast of the Cornwall. Series 8, recently streamed on Acorn TV, is due out on DVD and Blu-ray from the company in mid-December; Sigourney Weaver returns for the season’s finale.