Musée Picasso in Paris, Museum of Modern Art in Slovenia 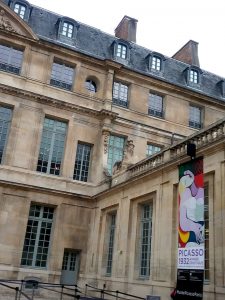 The Musée Picasso seems to be closed every time I’m in Paris. I finally managed to visit the museum devoted to the celebrated artist on a recent trip to Europe, though it was (natch) partially closed. Better yet, I visited the Museum of Modern Art in Slovenia.

The Picasso is not the only Parisian museum housing the work of an iconic Spanish painter, of course; there also Espace Dalí in Montmartre. The former, housed in a private mansion in Paris’ 3rd arrondissement, is the more imposing of the two. The current exhibition, “Picasso 1932,” is a chronological survey of the artist’s work for the year, organized in partnership with Tate Modern in London.

The comparatively little known Museum of Modern Art in Ljubljana, Slovenia (aka the Moderna galerija), is nothing short of a revelation. If you think New York City’s same-named institution offers more or less everything you need to know regarding 20th century art, you should have a glance at what you’re missing in the Balkans.

The museum’s permanent collection, “Continuities and Ruptures,” is anything but a boring survey of nationalistic art. The influence of such artists as Picasso and Rene Magritte is evident among the more avant-garde works on display, which exhibit an unexpected streak of originality. The work produced by Partisans, those active in the anti-Nazi resistance movement during World War II, is particularly surprising.

My favorite work in the museum is a drawing by painter-illustrator Hinko Smrekar, who was murdered by Italian fascists in 1942, at the start of WWII in Slovenia. This piece, drawn circa 1910 and titled “Slovenian Artists Exhibition,” transcends time and place like all great art. More than 100 years later, it speaks volumes.