“Curious Incident” at SCFTA, “Once” at SCR, “In a Word” at Chance 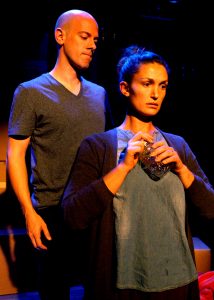 James McHale and Amanda Zarr in “In a Word.” Photo by Doug Catiller, True Image Studio.

Give ‘em the old razzle dazzle—gets ‘em every time. I have no evidence this thought passed through Simon Stephens’ brain en route to adapting “The Curious Incident of the Dog in the Night-Time” from the novel by Mark Haddon, but it very well might have. This mega-theatrical show about an extraordinary 15-year-old named Christopher, who’s accused of killing his neighbor’s dog and attempts to find the culprit, is nothing if not big.

From scenic design (Bunny Christie) and lighting (Paule Constable) to music and sound effects, the Tony Award-winning musical (at Segerstrom Center for the Arts in Costa Mesa through Sept. 17) is strikingly conceived and executed. Marianne Elliott’s astute direction is the key to making it all work smoothly; Adam Langdon is first-rate as Christopher. Unfortunately, Maria Elena Ramirez fails to project in the key role of Siobhan; between her British accent and the theatre’s acoustics, she’s largely unintelligible. (I wasn’t the only one who couldn’t hear her—there was a queue for hearing devices at intermission).

“Once” may not be everyone’s cup of tea but there’s no denying the stage production (at South Coast Repertory in Costa Mesa through Sept. 30) based on the 2007 movie written and directed by John Carney is hugely entertaining. The performance I witnessed drew one of the most enthusiastic standing ovations I’ve seen in years at SCR. This musical romance, which boasts a book by Enda Walsh with music and lyrics by Glen Hansard and Markéta Irglová (who co-starred in the film) is a wholly different animal from the picture but captures its essence.

There’s nothing particularly Irish about “Once” on stage or screen though it’s set in Dublin and centers on the relationship between an Irishman and a Czech woman, and that seems a missed opportunity. I don’t think you need 13 actors/musicians to tell this guy-meets-girl story; the Tony-winning stage version has a more substantial plot but I for one prefer the intimacy of the film. Rustin Cole Sailors is more than capable as Guy, while Amanda Leigh Jerry is exceptional as Girl. Kent Nicholson’s direction keeps it moving on a splendid set by Ralph Funicello.

And my favorite of the three shows I managed to see this week? That would be Lauren Yee’s “In a Word” (in its So Cal premiere at Chance Theater in Anaheim Hills through Oct. 8). Sometimes smaller is better. “Curious Incident” has more words, but “Word” arguably has more love of words. “Curious” and “Once” unquestionably have more pizazz but “Word” does a better job of telling a story. And story wins over spectacle every time, at least in my book. What the Chance lacks in budget it makes up for in imagination, and Christopher Scott Murillo’s set is a perfect example. Jocelyn A. Brown’s direction is simply magical.

I won’t spoil the story. Let’s just say this quirky dramedy concerns a missing boy, his adoptive parents and their day-to-day relationship as they ride a rollercoaster of emotions. Amanda Zarr gives a beautifully nuanced performance as Fiona, the boy’s mother, as those emotions play across the surface; Chance Dean provides good contrast as her somewhat detached husband. James McHale largely steals the show as the one-man supporting cast, playing the boy, a detective, a cat burglar and other roles with deft physicality and a wonderfully expressive face.