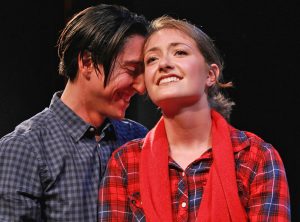 Theresa Rebeck’s “The Understudy” (at Modjeska Playhouse in Lake Forest through Sept. 3) is an example of what can happen when a playwright makes a name for themselves. This is not the ingenious author of “Seminar” and “Mauritius” at her best; put another name on the script and it would have a hard time getting produced. Director Deb Marley and two-thirds of her cast—Robert Downs and Hailey Tweter—appear to be giving their all, but their best efforts aren’t quite enough to make it work; Jaycob Hunter is less successful in the lead role but has his moments.

Actors will get the most entertainment out of this metatheatrical comedy. The play is full of existential jokes that fall flat on their face; though it aspires to the likes of Tom Stoppard’s “Rosencrantz and Guildenstern,” it sadly misses the mark. The highlight is a heart-felt rant about the lack of good roles for women, an all-too-real situation that will resonate with theatre folk but is none too amusing. Next up at Modjeska: “Cut” by Crystal Skillman, about the world of reality television.

A better bet is OC-centric’s 7th annual New Play Festival (at Chapman University in Orange through Aug. 27), one of So Cal’s best offerings of original works of theatre. A program of one-act plays pairs Sara Saenz’s “Crimson,” a clever get-even scenario hatched in the aftermath of a rape, with Karen Fix Curry’s “Celtic Knot,” a compelling family drama pitting a stubborn Irish woman against her kid brother’s American wife. Karly Thomas’ full-length “Fair” is an offbeat fantasy that spins the “beauty is in the eye of the beholder” aphorism on its head.

Though I agree with the concept of colorblind casting in theory, I’m not sure I would have chosen a Latina to direct an Irish-themed play—or cast Latino and Asian American actors in it. Yet in “Celtic Knot” director Angela Cruz magically transports us to a farm in the middle of Eire, as well as an Irish pub in Chicago, with a surprising degree of authenticity. This drama, perhaps the most satisfying of the three plays, would be right at home on the stage of Dublin’s Abbey Theatre. Candice M. Clasby (Mary), David Edward Reyes (her brother Sean), and Bill Carson (Eamon, their father) all sound like the real deal; Talia Goodman (Beth, the wife) provides an ideal contrast.

If you haven’t had your fill of the Bard yet this season, Shakespeare/Summerfest Orange County is offering an intimate and innovative staging of the seldom-produced “King Henry IV, Part I.” Yes, this is one of the history plays, but it features Shakespeare’s most enduring comic character, the larger-than-life Falstaff. Furthermore, you can sit on the stage, smack in the midst of the action. It promises to be anything but boring. The catch is that the show just opened (at the Garden Grove Amphitheater in downtown Garden Grove) and it’s closing Aug. 26.

The play takes place in 13th century England. Henry IV, who has just seized the throne, is rarely onstage. The focus of this coming-of-age story is Prince Hal, the king’s ne’er-do-well heir. Will the crown prince stop wenching and carousing about town with his buddy (and surrogate father) Falstaff and sober up, and if so when? Will he best his rival, the volatile Hotspur, whose actions inspire him? And which one’s the real hero of the play? Don’t ask me, I haven’t seen or read it since I caught it up in Ashland, Oregon, 40 years ago; I’m coming this week to find out.