New Swan’s “Taming of the Shrew,” Alchemy’s “Much Ado About Nothing” 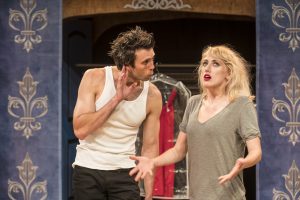 Ryan Imhoff and Grace Morrison in New Swan’s “Taming of the Shrew.”

August. Time to swelter in the city. And brush up your Shakespeare. Those who love the Bard’s comedies—as well as those who tend to avert their eyes and ears for fear they won’t understand it—are in for a treat this summer with both the New Swan Shakespeare Festival (in their sixth season at UC Irvine, through Sept. 2) and the Alchemy Theatre Company (in their fifth annual production at Huntington Beach Central Park Amphitheater, through Aug. 19.)

New Swan’s “The Taming of the Shrew” is an extraordinarily physical show, considering the intimate confines of their unique theatre-in-the-round venue. Ryan Imhoff is pure animal as Petruchio, in an outrageous balls-to-the-wall performance that goes as far over the top as any I’ve ever seen. Grace Morrison gives as good as she gets in a smart, feisty portrayal of Kate, and does much to nullify the misogynistic aspects of the play that often give one pause.

Beth Lopes directs this wildly energetic free for all with aplomb; though the ‘70s era “rock ‘n’ roll” setting may not be to everyone’s taste, it works better than one might imagine. There isn’t a weak link in the ensemble, with Rosemary Brownlow (Tranio), Thomas Varga (Hortensio), Grace Theobald (Grumio) and Chynna Walker (Bianca) doing particularly good work. Varga and Theobald (as Caliban and Ariel, respectively) virtually steal the show in Eli Simon’s more traditional production of “The Tempest,” which runs in rep with “Shrew.” Kathryn Wilson’s costumes for both shows are deserving of special mention.

Alchemy seems to have come of age with this year’s “Much Ado About Nothing,” perhaps their best show yet. Longtime offstage collaborators Jeff Lowe and Jesse Runde have terrific chemistry as Beatrice and Benedick, the sparring lovebirds at the heart of the Bard’s wittiest play. Lowe demonstrates once again why he should be teaching other actors how to project, and do it with distinction; Runde rises to the occasion in a rare turn out of the director’s chair, a delightful one at that.