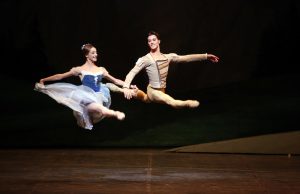 If you hurry you can catch Teatro alla Scala Ballet’s “Giselle” at Segerstrom Center for the Arts today before they leave town. This is a rare event—the first time the company has visited the US of A since July 2001, when they performed at SCFTA and in New York.

The bad news is that Misty Copeland has left the building. The good news is that virtually the entire corps de ballet is as close to perfection as the company’s soloists, and Teatro alla Scala’s take on this tale of unrequited love is a pure unadulterated delight for lovers of classical ballet.

Copeland lived up to her reputation as a superstar opening night, dancing the titular role of the peasant girl with a beauty and grace rarely equaled on So Cal stages. La Scala star Roberto Bolle is dynamic as Albrecht, the prince who pays court to Giselle though he is, shall we say, otherwise engaged. Nicoletta Manni, who co-stars as the queen of the Willi maidens—the vengeful spirits of brides who have died prior to their wedding day—is sheer poetry, as delicate on her feet as a dandelion in the wind.

Bolle and Manni will perform today with Argentinian dancer Marianela Nuñez, a star of the Royal Ballet. “Giselle,” a triumph at its world premiere in 1841, is one of the most popular and most performed classical story ballets. The La Scala production is enhanced by Aleksandr Benois’ costumes and sets—both the Act I village setting and the Act II graveyard are richly detailed as one would hope, but rarely finds.