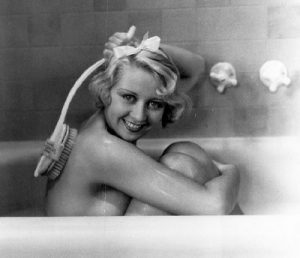 Lou Sabini’s “Sex in the Cinema: The ‘Pre-Code’ Years (1929-1934)” is a solid, well-researched introduction to the films of that brief period between the end of silent movies and the enforcement of Hollywood’s prudish Production Code. Leading ladies with loose morals, ribald dialogue, overtly sexual situations, nudity and gratuitous undressing scenes were the stuff dreams were made of in the Depression era, and Sabini is more than familiar with the territory.

From the raw violence of James Cagney’s breakthrough film, “The Public Enemy,” to the risqué plot of Barbara Stanwyck’s “Baby Face,” Sabini delivers the goods. The author virtually salivates when talking about the decadence of “The Story of Temple Drake” and the salacious William Faulkner novel it was based on; he gleefully points out the scantily clad hula dancers censored from many release prints of Laurel and Hardy’s “Son of the Desert.”

For a book titled “Sex in the Cinema,” however, there isn’t quite enough sex. To his credit, Sabini is a historian rather than a tabloid reporter trying to exploit the topic. But he comes up short-handed on some entries, like the one on Wheeler and Woolsey’s “Cockeyed Cavaliers,” which notes the spicy exchanges between Woolsey and Thelma Todd but offers no examples. However, the book (available from BearManor Media) includes tidbits of info that will surprise even those who know these films well, and lots of great stills that may well entice readers to check out some of the more obscure films.

“Early Women Filmmakers: An International Anthology” (available from Flicker Alley on Blu-ray and DVD in a dual format edition) shines the spotlight on the cinema’s largely unsung and underappreciated contributors. Among the European directors featured in this 3-disc box set are the prolific Alice Guy Blaché, Germaine Dulac and the notorious Leni Reifenstahl, whose work glorified the Third Reich; there are three intricate short films by stop motion animator Lotte Reiniger, including one viewed as an anti-Nazi allegory.

The socially relevant dramas of Lois Weber, Hollywood’s most important silent filmmaker of the fair sex, are typified by “The Blot.” Comedienne Mabel Normand, actress Dorothy Davenport (billed as Mrs. Wallace Reid), and avant-garde pioneer Maya Deren (the still striking “Meshes of the Afternoon”) are also part of the package. Dorothy Arzner, the preeminent woman director of her time, is represented here only by a four-minute excerpt—the sole disappointment in this invaluable video release produced by the late David Shepard and Serge Bromberg.

Fiona Gordon is an actress-writer-director who has made a series of films in collaboration with her husband, Dominique Abel. Somehow it has taken until now, with the recent release of their charming comedy “Lost in Paris,” for this reviewer to discover them. The tale of a Canadian woman (Gordon) who goes to Paris in response to a call of distress from her elderly aunt, and meets up with a homeless character (Abel) who only complicates her adventure, is sure to win the duo new admirers. (The film opened in Los Angeles earlier this month).

Gordon proceeds to loose her passport, luggage and cell phone almost as soon as she arrives in Paris, and things only get worse from there. The film is crammed with wild sight gags, interrupted by a delightful musical sequence that has to be seen to be believed; Gordon seems to be channeling Lucille Ball and Carol Burnett, not to mention the slapstick queens of the silent era, while Abel is clearly an admirer of Chaplin, Keaton and their successor, Jacques Tati. The late Emmanuelle Riva plays the aunt and Pierre Richard her friend, lending an extra touch of class to the proceedings.