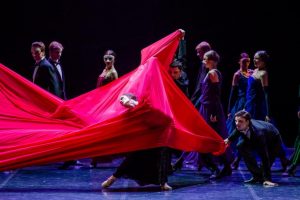 The Teatro alla Scala Ballet Company’s “Giselle” at Segerstrom Center for the Arts July 28-30 is certain to be a must-see event—especially with Misty Copeland in the title role on opening night. But Eifman Ballet’s “Red Giselle” (closing today at Segerstrom Center for the Arts in Costa Mesa) is not to be missed by any aficionado of ballet and modern dance.

Eifman’s muscular, highly stylized ballet is dedicated to Olga Spessivtseva, a great 20th century ballerina who identified with the role of Giselle so strongly she was unable to escape the heroine’s tragic fate and ended up spending 20 years in a mental clinic. Eifman and company make striking use of music (by Pyotr Tchaikovsky, Alfred Schnittke, and Georges Bizet) and lighting. There’s an eclectic range of styles, including a surprising parody of ballroom dancing in a scene set in Paris during the Jazz Age.

At times the influence of German Expressionism is apparent (think Fritz Lang’s “Metropolis”), at other times a more contemporary sensibility (as in Stanley Kubrick’s “A Clockwork Orange”). The show may disappoint audiences unprepared to take the bold leap of faith its creator does, but even the patron who told me she wasn’t sure if she liked it admitted it was very powerful and would stay with her.

I’ve seen two shows I can highly recommend at the Hollywood Fringe Festival in recent weeks. Ché Walker’s “Been So Long” begins with a guy walking into a bar…but it’s not what you think. There’s a humor aplenty in this offbeat seriocomic drama of love, lust and murderous jealousy. It takes Walker about a minute to grab your attention; once he does he never lets go, and Austin Iredale’s attentive direction makes the seemingly impossible work on stage. The five-actor ensemble is first rate, with Maia Nikiphoroff’s wonderful rubber face and Carlo Figlio’s stoic countenance of special note. This US premiere is not to be missed.

“Hello Again!” is solid entertainment because Linden Waddell clearly has great reverence for Allan Sherman’s material and genuine stage presence. Many of the song parodies she performs, like the forgotten “Chopped Liver” (a dead-on spoof of “Moon River”), weren’t among Sherman’s most successful but they work wonderfully with a live audience. Never heard of Allan Sherman, the “Weird Al” of the ’60s? No matter; nor had many of the young people in the audience (apart from maybe “Hello Muddah, Hello Fadduh”) but they clearly had a great time.