“Monster Builder” in Costa Mesa, “Hanna’s Suitcase” in Laguna, the problem with actors 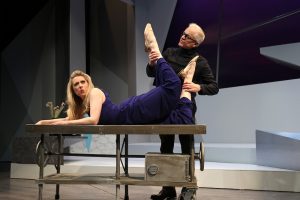 Danny Scheie and Annie Abrams in “The Monster Builder.” Photo by Debora Robinson/SCR.

A two-act play with a gangbuster first act has a built-in problem—proceeding with a worthy follow-up which meets the heightened expectations of the audience. That’s the problem in a nutshell with Amy Freed’s “The Monster Builder” (through June 4 at South Coast Repertory).

The first half of this witty farrago about a superstar architect—and by extension pompous ass egomaniacs in every arena, including the Oval Office—is such a wild, zany ride it’s literally a tough act to follow. Freed almost sets herself up to fail by virtue of her talent.

Art Manke’s direction takes the bull by the horns and runs with it for all it’s worth. Danny Scheie is a hoot as Gregor, the architect in question. Annie Abrams delights as his trophy wife, transcending the stereotype; Susannah Schulman Rogers holds her own as his protégé. Thomas Buderwitz outdoes himself (as usual) with his scenic design, while Rodolfo Ortega’s original music and soundscape artfully complements the production.

Some Holocaust stories die forever because there’s no one left to tell the tale. “Hanna’s Suitcase,” adapted by Emil Sher from the book by Karen Levine, is a true story that thankfully survives. An orphan’s luggage compels an educator and her young charges to learn what happened to its owner when the long-forgotten suitcase turns up in a Holocaust education center in Tokyo, in this inspirational one act play recently presented by Laguna Playhouse’s long-running Youth Theatre.

Directed by Donna Inglima, the company acquitted itself with eloquence. The children (notably Claire Tigner, Nathan Schrodt, and Abigail Williams as Hana) turned in sensitive performances, matched by the adult cast (headed by Marita de Lara). The only problem with the show, and it’s a growing problem, is that actors—even Equity actors—are seemingly no longer being taught to project their voices.

It may well be that performers are being handicapped by directors who aren’t checking the volume from the back of the house. This faux pas is by no means limited to Laguna; it’s a perennial problem at South Coast Rep (though not with “Builder”) and other theatres. For the price of the ticket, audiences deserve to hear the actors. ‘Nuff said.