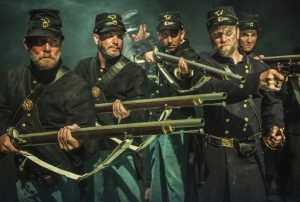 “The Killer Angels” at Maverick Theater.

The best way to comprehend the Battle of Gettysburg—the turning point in the Civil War—is to tour the battlefield with an historian. At present, your best bet on the Left Coast would be to check out “The Killer Angels” at Fullerton’s Maverick Theater (playing through June 24). Brian Newell’s adaptation of Michael Shaara’s Pulitzer Prize-winning historical novel is a fine dramatization that focuses on the strategic effort behind the scenes, on both sides of the conflict.

Brian Kojac heads a strong ensemble cast as General Robert E. Lee, in a beautifully understated performance that lends a gravitas to the proceedings. Frank Tryon (Col. Chamberlain, commanding the Union army), Mark Coyan, Brock Joseph, Paul Jasser and others too numerous to mention contribute finely-etched portrayals of officers and soldiers, putting a human face on the conflict of 1863 that consumed a horrific number of lives.

Newell (who has toured the battlefield, as I have) is practically a one-man show behind the scenes, producing and directing this epic 2.5 hour production as well as designing lights, sound, and costumes. The show repurposes the music of the late film composer James Horner (“Glory”). The Gettysburg Address, delivered by several cast members, provides a fitting conclusion to the proceedings, marking the 150th anniversary of the war’s end and Lincoln’s assassination.

Polish painter Władysław Strzemiński, co-founder of the National School of Fine Arts in Lódź, was the kind of professor who told his students, “The purpose of art is to impose its truth on reality.” The renowned avant-garde artist is the subject of “Afterimage,” the last film directed by the great Polish filmmaker Andrzej Wajda before his death in 2016. Film Movement presents the US theatrical release, opening in NYC on May 19th and in LA (at Laemmle Theaters) on May 26th.

Strzemiński (played by Boguslaw Linda) fights a no-win battle with the Stalinist government, clashing with their socialist agenda and campaign against “decadent art” in post-war Poland. Wajda, as uncompromising as his subject, conveys the indomitability of the human spirit and evokes the bleak mood of the era with a muted color palette.

Hot tip: Laguna Playhouse is offering free tickets for all theatergoers 21 and under (ID required) to “The Absolute Brightness of Leonard Pelkey,” an inspirational one-man show written and performed by Academy Award-winner James Lecesne (June 11-25).